Guide to Understanding the Incremental Margin

What is the Incremental Margin?

The Incremental Margin measures the change in a profit metric per unit change in revenue, so conceptually it reflects the profit margin of growth.

How to Calculate Incremental Margin (Step-by-Step)

A profit margin measures the percentage of a company’s net revenue remaining once certain expenses have been deducted.

Most profit margin metrics are a ratio between a profitability metric to revenue, i.e. the “top line” of the income statement.

By comparing the profit metric to revenue, one can estimate a company’s profitability and identify its cost structure, i.e. where most of the company’s spending is allocated.

Moreover, profit margins can be compared versus that of industry peers to determine if the company operates more efficiently (or less efficiently) relative to its competitors.

The most common profit margin metrics are the following:

While profit margins by themselves can be very informative, another approach to analyzing them is to calculate the incremental margin, which shows the direction that profit margins are moving as a result of changes in sales.

The formula for calculating the incremental margin is as follows.

If, for example, we’re calculating the incremental EBITDA margin, we’ll replace the “Profit Metric” with “EBITDA”, as shown below.

How to Interpret Incremental Margin

In particular, the incremental margin is important for cyclical companies, where performance is tied to an external factor such as the current economic conditions.

For cyclical industries – e.g. manufacturing, industrials – strong margins are crucial because it reflects that a company can capitalize at the top of the cycle and manage its margins in a down cycle, where demand is reduced and margins are pressured.

Companies with cyclical performance must take into account their margin “cushion” as it determines the amount of “cushion” it has if the economy were to undergo a contraction or enter a recession.

The incremental margin metric is also closely tied to the concept of operating leverage, as a company’s cost structure – i.e. proportion of fixed vs. variable costs – largely determines how its profit margins uphold throughout different economic cycles.

Suppose we’re tasked with calculating the incremental margin for a company from 2020 to 2021.

The financials of our hypothetical company are shown below, along with the associated profit margins.

However, the operating margin of our company, contrary to the gross margin and EBITDA margin, declined from 12.0% to 11.4%.

Since we have all the necessary inputs to calculate the incremental margins, we’ll apply the formula for each profit metric.

Conceptually, we can see how the gross profit grew by $20 million, while revenue increased from $100 million to $140 million.

If we focus solely on the year-over-year change – i.e. the incremental difference – the incremental gross margin is $20 million divided by $40 million, which comes out to 50%. 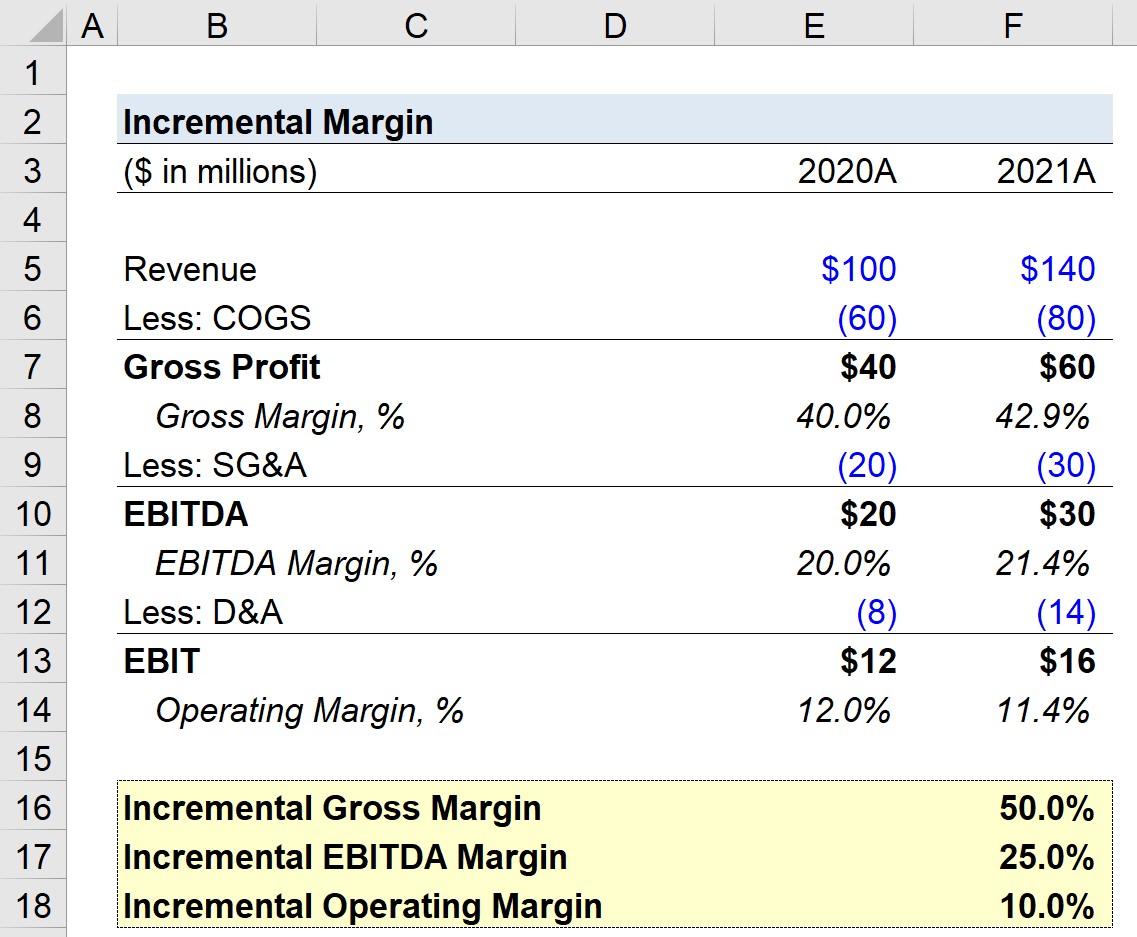