What is the Cash Conversion Cycle?

The Cash Conversion Cycle measures the approximate number of days it takes a company to convert its inventory into cash after a sale to a customer.

The cash conversion cycle (CCC) measures the amount of time required for the company to clear out its stored inventory, turn its outstanding accounts receivables (A/R) balance into cash, and how long the payment date to suppliers for goods/services received can be pushed out.

By consistently monitoring the CCC metric, the company can identify and improve upon any operational deficiencies related to working capital that reduce free cash flows (FCFs) and liquidity.

The “cycle” refers to the process companies undergo in purchasing inventory, selling the inventory to customers on credit (i.e., accounts receivable), and collecting cash payments from these customers.

The calculation of CCC is composed of three working capital metrics:

For a quick review of the working capital metrics mentioned, see the chart summarizing the main points below.

The reason why CCC is such an important metric to track is that it can be used to evaluate the operating efficiency of a particular company, as well as the decision-making capabilities of the management team.

One of the main reasons that the net income falls short in capturing the actual liquidity of the company is due to working capital – most notably, inventory, accounts receivable (A/R) and accounts payable (A/P).

How to Interpret Cash Conversion Cycle (High vs. Low)

As a generalization, companies with lower CCCs tend to be better off from a cash management perspective.

If CCC is trending downward relative to previous periods, that would be a positive sign, whereas CCC trending upward points towards potential inefficiencies in the business model.

CCCs that are high relative to the industry benchmark indicate that a larger proportion of the company’s cash is tied up in its operations – for instance, the company might be holding onto inventory in its storage facilities for an extensive duration of time before those items are sold.

Putting together the above, the CCC is equal to the average time needed for inventory to be sold and cash collected from customers – minus the timing “gap” in between receiving products or services from suppliers/vendors and the date of actual payment.

Note how in the table below, the NWC changes on the left side each have positive implications on free cash flow (FCF). In comparison, the right side shows the opposing change and contrasting impact on FCFs.

The target number of days for the CCC differs substantially by the industry the company operates within and the nature of products/services sold (e.g., purchase frequency, order volume, seasonality, cyclicality).

However, for the most part, the lower the CCC, the more beneficial it is for the company, as it implies that less time is needed to convert working capital into cash on hand. In addition, it is particularly useful to track the CCC metric for a particular company year-over-year (YoY) – and to benchmark against comparables peers in the same industry.

A positive cash conversion cycle, even if on the lower end relative to comparable companies, is still a “use” of cash at the end of the day.

While an uncommon occurrence, certain companies can have negative CCCs, which means the net impact is a “source” of cash.

A negative CCC would be accomplished by turning over inventory frequently and receiving cash payments for products sold before needing to pay suppliers.

One of the most frequently cited examples of companies that have a negative CCC is Amazon. By having a negative CCC, Amazon was able to essentially finance its operations through its favorable delayed payment terms with suppliers due to the time lag; but unlike traditional debt financing, this came with no interest.

For an unprofitable company with steep losses, this freely available cash helped fund Amazon’s growth initiatives and played an influential role in shaping the company into what it is today.

Even compared to other market leaders such as Walmart which are known for their efficiency, Amazon had a significantly lower CCC that dipped below zero. 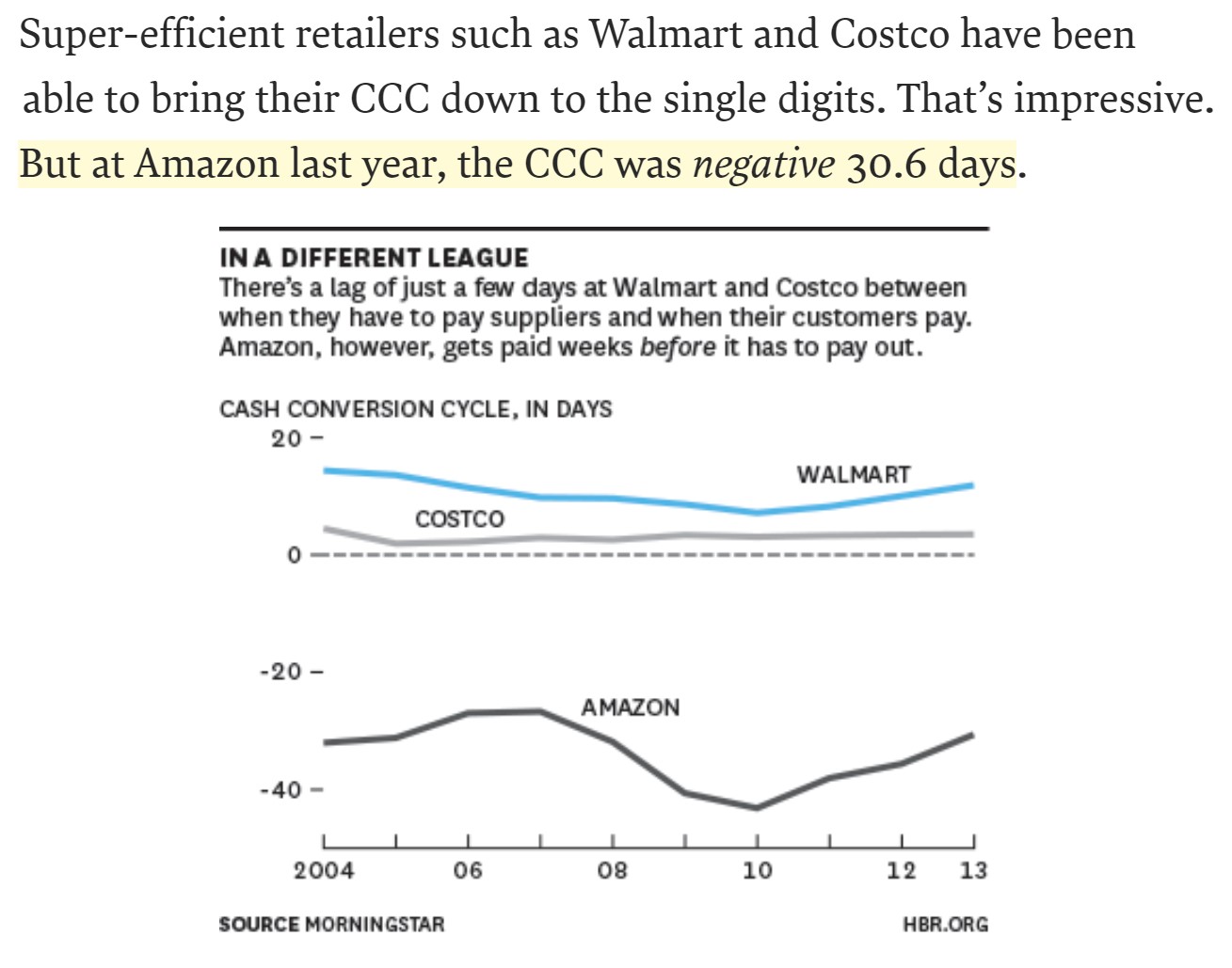 Here, in our simple example, the company has the following working capital metrics:

Given those assumptions, we can tell the company has been gradually improving in all three categories. Upon extending the 2017 hard-coded assumptions and step function into the rest of the years, we can calculate the historical CCC for 2018 to 2020.

The completed output sheet is posted below along with a chart illustrating the downward trend in the CCC from 65 days in 2017 to 50 days by 2020.

The year-over-year progress demonstrates that the company’s management has been able to identify areas in the business model that require improvement and effectively implement the required adjustments to produce tangible results. 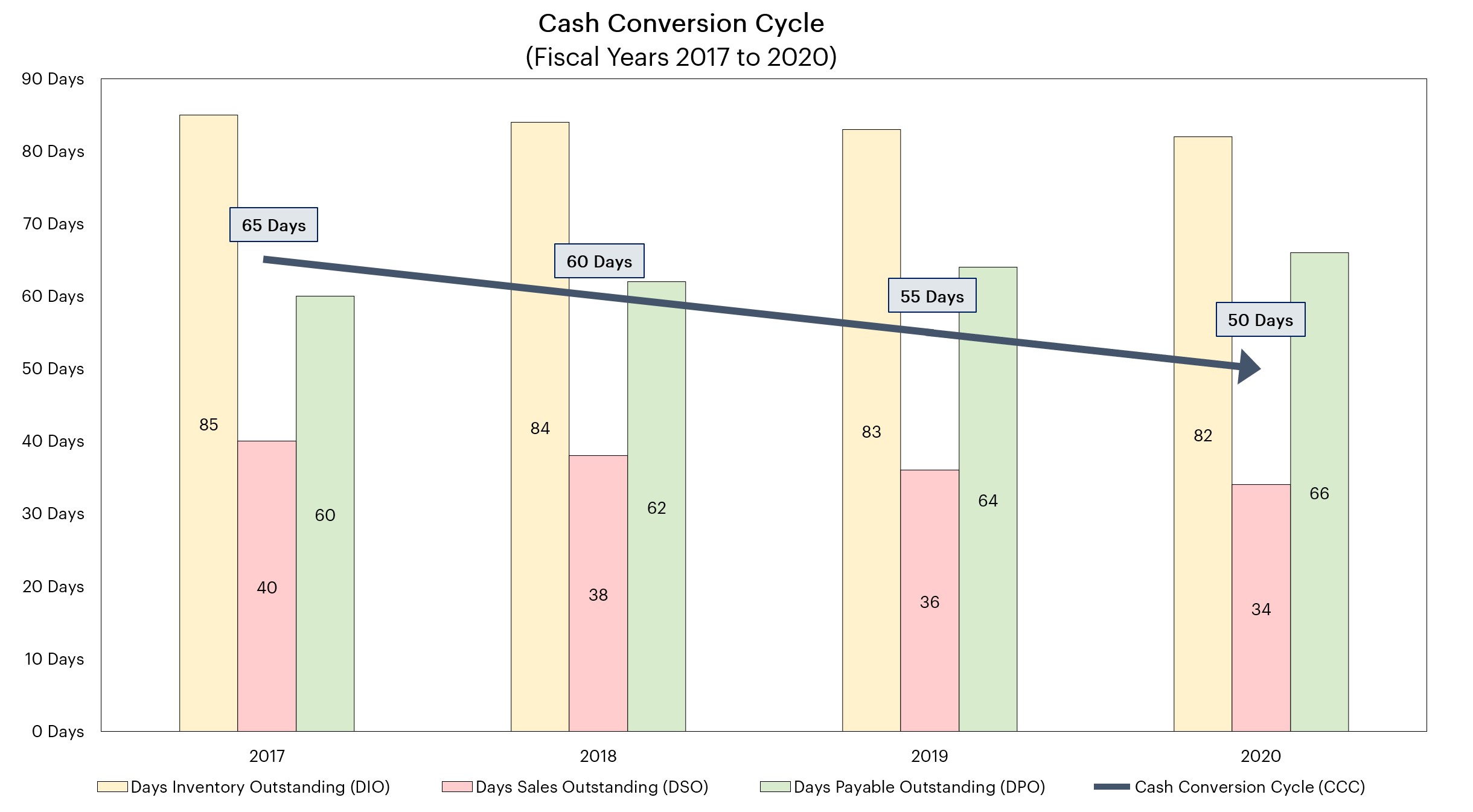