Guide to Understanding the EBITDA Margin (%)

What is EBITDA Margin?

The EBITDA Margin (%) measures a company’s core operating efficiency and is calculated as EBITDA divided by revenue in a given period, expressed as a percentage.

How to Calculate EBITDA Margin (Step-by-Step)

As we’ve described earlier, the EBITDA margin is the ratio between EBITDA and revenue.

While revenue is the starting line item on a company’s income statement, EBITDA is a non-GAAP metric intended to represent a company’s core profitability on a normalized basis.

So in short, the EBITDA margin answers the following question, “For each dollar of revenue generated, what percentage trickles down to become EBITDA?”

To calculate the EBITDA margin, the steps are as follows:

But before we delve deeper into the metric, review the primer on EBITDA to ensure the profit metric is fully understood.

EBITDA reflects the operating profits of a company, i.e. revenue less all operating expenses except for depreciation and amortization expense (D&A).

Because EBITDA excludes D&A, it is a measure of operating profits that is undistorted by an often large non-cash accounting charge in each period.

When compared to the amount of revenue generated, the EBITDA margin can be used to determine the operational efficiency of a company and its capacity to produce sustainable profits.

The formula for calculating the EBITDA margin is as follows.

For instance, suppose a company has generated the following results in a given period:

In this simple scenario, our company’s margin is 50%, which we computed from $5 million in EBITDA divided by the $10 million in revenue.

How to Interpret EBITDA Margin by Industry

For comparisons of any profit margin to be more useful, the companies chosen as part of a peer group should operate in the same industry, or in adjacent ones with similar performance drivers, in order to take into account industry-specific factors.

Generally speaking, higher EBITDA margins are perceived more favorably, as the implication is that the company is producing a higher amount of profits from its core operations.

While the EBITDA margin is arguably the most commonly used profit margin, there are others, such as the following:

EBITDA margin’s closest cousin is the operating margin, defined as EBIT/Revenue, where EBIT is defined as the revenue less ALL operating expenses (including D&A).

The critical difference between the EBITDA and operating margin is the exclusion (i.e. in the case of EBITDA) of depreciation and amortization. Practically speaking, that means that for a company that has D&A expenses, the operating margin will be lower in comparison.

The operating profit (EBIT) is an accrual GAAP measure of profit, whereas the EBITDA metric is a GAAP/cash hybrid profit margin.

All three companies are close industry peers and share relatively similar financials in terms of their core operations.

To begin, we’ll first list out the assumptions for revenue, cost of goods sold (COGS), and operating expenses (OpEx), as well as depreciation and amortization (D&A).

Using the provided assumptions, we can calculate the EBIT for each company by subtracting the COGS, OpEx, and D&A.

Typically, the D&A expense is embedded in either COGS or OpEx, but we have explicitly broken out the amount in this exercise for illustrative purposes.

In the following step, we’ll reconcile the amount by adding back the D&A, which results in EBITDA.

In the final part, the EBITDA margins for each company can be calculated by dividing the calculated EBITDA by revenue.

Upon entering our inputs into the appropriate formula, we arrive at a 40.0% margin.

The operating margin and net income margin of the companies are impacted by their different D&A values, capitalization (i.e. the interest expense burden), and tax rates.

In general, the lower on a page a profitability metric is found on the income statement, the greater the effects of the differences in discretionary management decisions related to financing as well as tax differences.

But still, the fact that the profit metric is less susceptible to discretionary accounting and management decisions causes EBITDA to remain one of the most practical and widely accepted metrics for comparison. 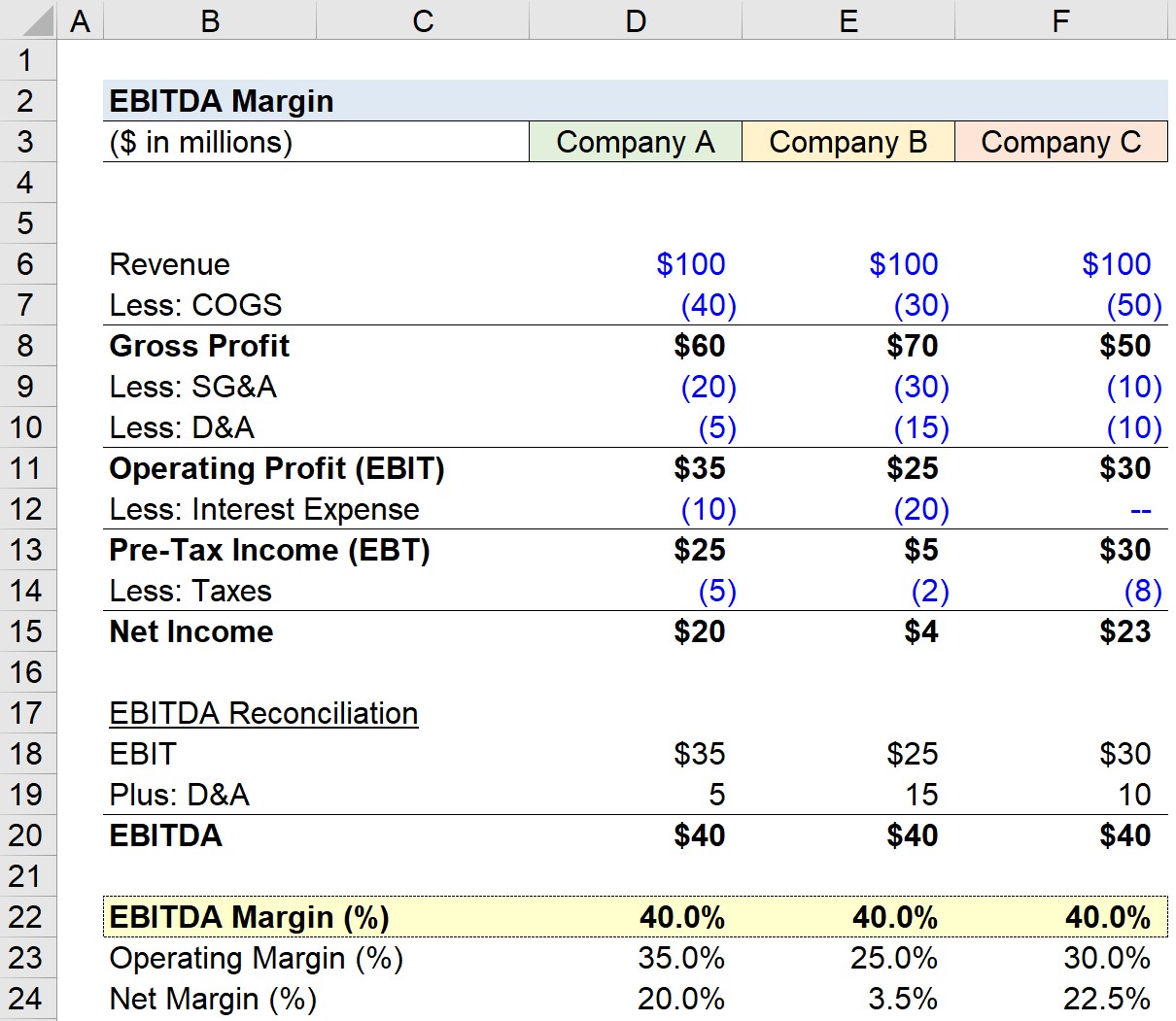