What is Interest Income?

Companies retain cash and cash equivalents on their balance sheet to ensure they have sufficient liquidity to meet short-term financing and working capital needs.

Cash not reinvested into operations is frequently invested into interest-yielding accounts such as the following:

These sorts of short-term investments typically carry low yields, but it still enables the company to earn a return and offset losses from having “idle” cash.

For most companies – excluding financial institutions such as commercial banks – interest is reported in the non-operating items section of the income statement.

The interest earned is not considered a non-financial company’s core part of operations, i.e. it is not integral to the company’s normal course of business.

How to Calculate Interest Income (Step-by-Step)

A company’s interest income is determined by its projected cash balances and an interest rate assumption.

With that said, the forecasted interest income can only be computed once the balance sheet and cash flow statement are complete.

The standard method used to forecast either type of interest creates “circularity” within a model, which we’ll discuss how to circumvent later in our modeling tutorial.

The Excel formula for calculating the interest income takes the average between the beginning and ending cash and cash equivalents balance, and then multiplies it by the interest rate earned on the cash.

Interest Income vs. Interest Expense: What is the Difference?

In such cases, it is worth the time to locate the individual amounts broken out separately, so that each item can be referenced and projected in the forecast.

Like its counterpart, interest expense, interest income is modeled when building out the debt schedule of a financial model. Hence, interest is considered one of the “finishing touches” of a 3-statement model.

On the income statement, interest income and interest expense are often presented together, but there is a clear distinction between the two items:

Suppose a company’s beginning cash balance was $20 million in 2020.

We’ll assume the net change in cash – i.e. the total movement of cash in the specified period – is an increase of $2 million across both periods.

Moreover, the interest rate earned on cash for both periods will be set at 0.40%.

The formula for calculating the interest income in Excel is as follows:

While not necessary for our simple exercise, setting up a circularity switch is crucial in a properly integrated 3-statement model.

If the cell named “Circ” is set to zero, the formula calculates the interest as zero.

Conversely, the formula could also be set so that if the circularity switch is turned on, only the beginning cash balance is used for the calculation. 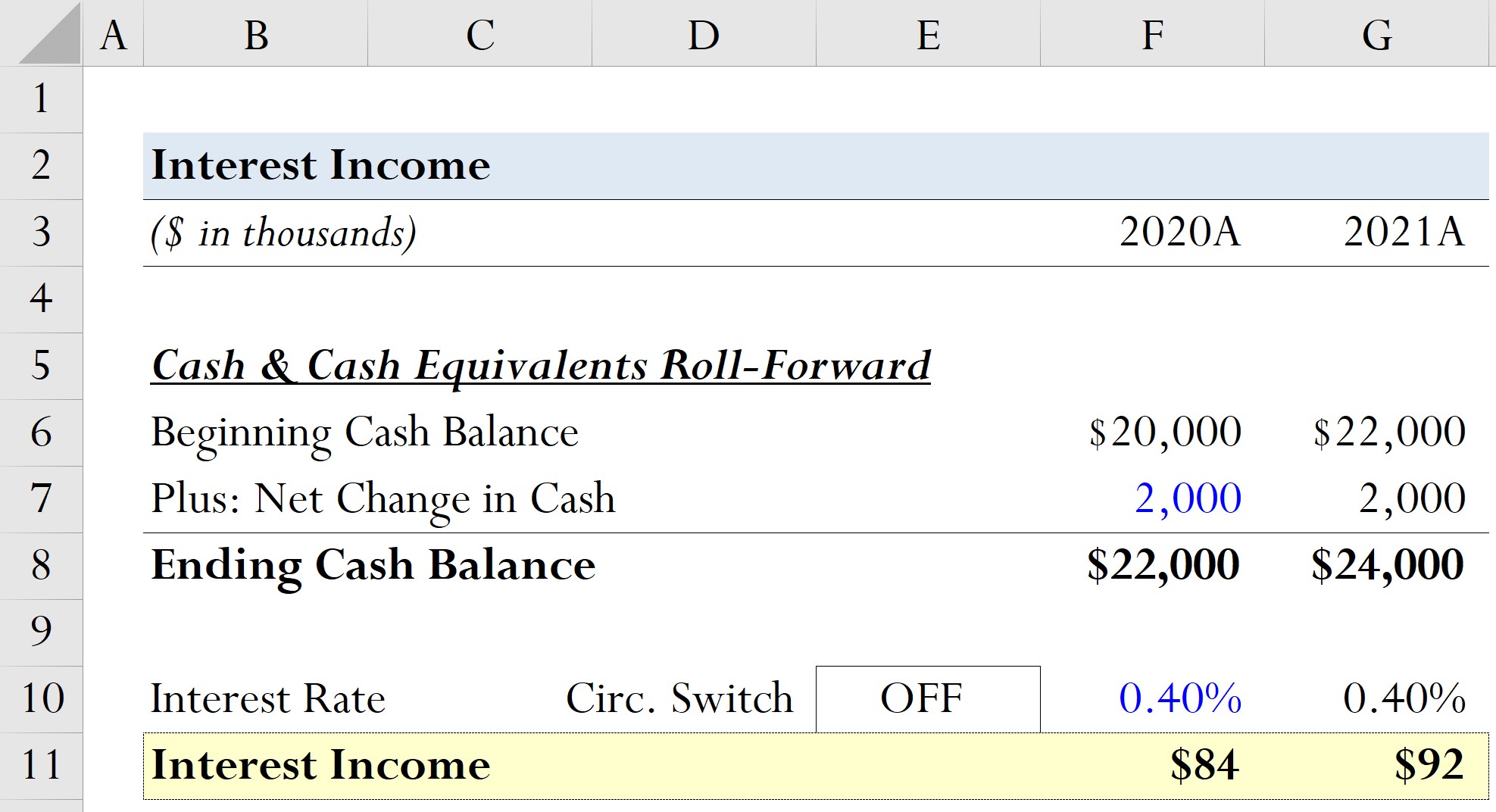