What is Pre Tax Income?

Pre Tax Income, or earnings before taxes (EBT), refers to the remaining earnings once all operating and non-operating expenses, except for taxes, have been accounted for.

By the time you reach the pre-tax line item, the starting line item of the income statement – i.e., the company’s revenue in the period – has been adjusted for:

Common examples of non-core income or expenses would be interest expense and interest income.

Therefore, a company’s interest expense and other non-core income or expenses must be subtracted from operating income (EBIT) to calculate pre tax income.

The formula for calculating the pre tax income (EBT) is as follows.

“Pre Tax” means that all income and expenses have been accounted for, except for taxes. Thus, pre-tax income measures a company’s profitability before accounting for any tax impact.

Once taxes are deducted from a company’s pre-tax income, you have arrived at net income (i.e. the “bottom line”).

Conversely, if given the net income value, the pre-tax income can be calculated by adding back the tax expense. 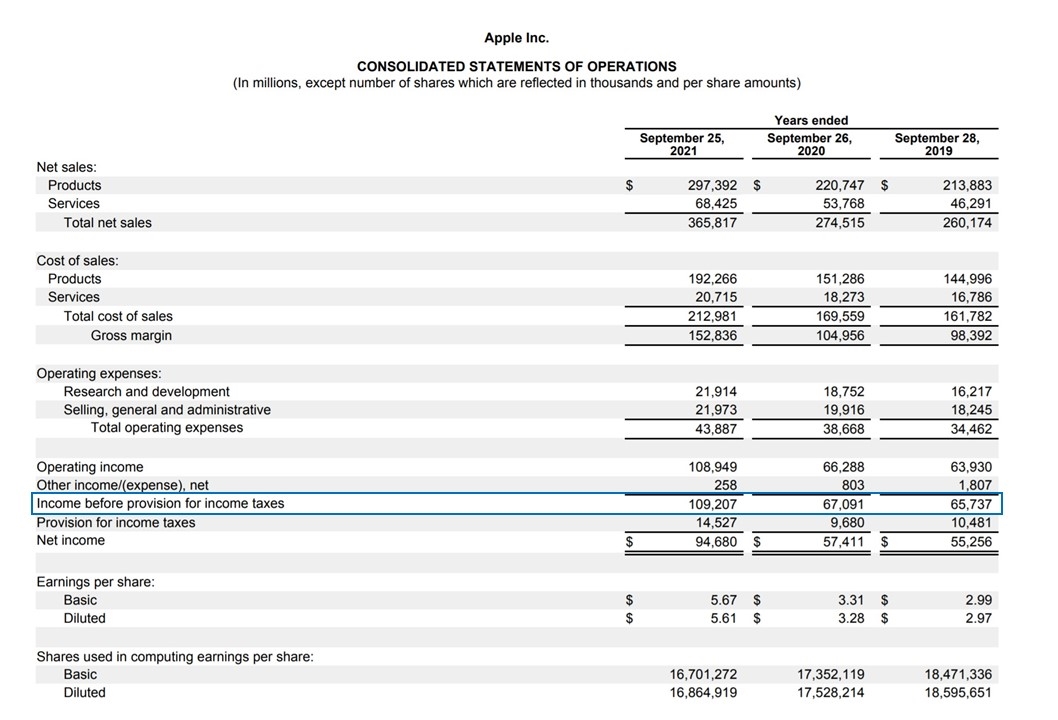 The pre-tax profit margin (or “EBT margin”) represents the percentage of profits a company retains prior to paying mandatory taxes to the state and/or federal government.

To convert the result into percentage form, the resulting amount from the formula above must be multiplied by 100.

How to Interpret Earnings Before Tax (EBT)

For instance, the profitability of companies can deviate largely due to their geographic location, where corporate taxes could differ, as well as due to differing tax rates at the state level.

The company could also have items such as tax credits and net operating losses (NOLs) that can affect its effective tax rate – which further makes comparisons of comparable companies’ net incomes less accurate.

In the context of relative valuation, the primary limitation to pre-tax profit is that the metric is still affected by discretionary financing decisions.

Despite the removal of tax differences, the EBT metric is still skewed by different capitalizations (i.e. interest expense) within the peer group, so a company could show higher profits than a peer due to not having any debt or associated interest expense.

Hence, EBITDA and EBIT are the most widespread valuation multiples – i.e. EV/EBITDA and EV/EBIT – in practice, as both metrics are independent of capital structure decisions and taxes.

The pre-tax income metric is most commonly used for calculating the taxes paid, rather than for peer comparisons.

For purposes of building projection models, the chosen tax rate can be one of the following:

The effective tax rate represents the percentage of a company’s taxes paid relative to its taxable income (EBT).

The effective tax rate for historical periods can be calculated by dividing the taxes paid by the pre-tax income (or earnings before tax), as shown below.

On the other hand, the marginal tax rate is the taxation percentage on the last dollar of a company’s taxable income.

The amount owed in taxes is largely dependent on the statutory tax rate of the governing jurisdiction, not just the company’s taxable income – i.e. the tax rate adjusts based on the tax bracket the company falls under.

The effective and marginal tax rates differ because the effective tax rate uses pre-tax income (EBT) from the income statement, which is calculated under accrual accounting standards.

Since there can be differences between the earnings before taxes (EBT) amount recorded on the income statement and the taxable income reported on tax filing, the tax rates are more often than not different.

But in either case, the tax rate is multiplied by EBT to determine the taxes paid in the period, which is necessary to arrive at the net income line item (the “bottom line”).

For our illustrative scenario, suppose we’re calculating a company’s pre-tax profit with the following financial profile.

Using the assumptions provided, the gross profit is $50 million, whereas the operating income (EBIT) is $30 million.

Further, the gross margin and operating margin are 50% and 30%, respectively.

In the final part of our exercise, we’ll calculate the company’s pre-tax income, which is equal to operating income (EBIT) minus the interest expense.

From there, the final step before arriving at net income is to multiply the pre-tax income by the 30% tax rate assumption – which comes out to $18 million. 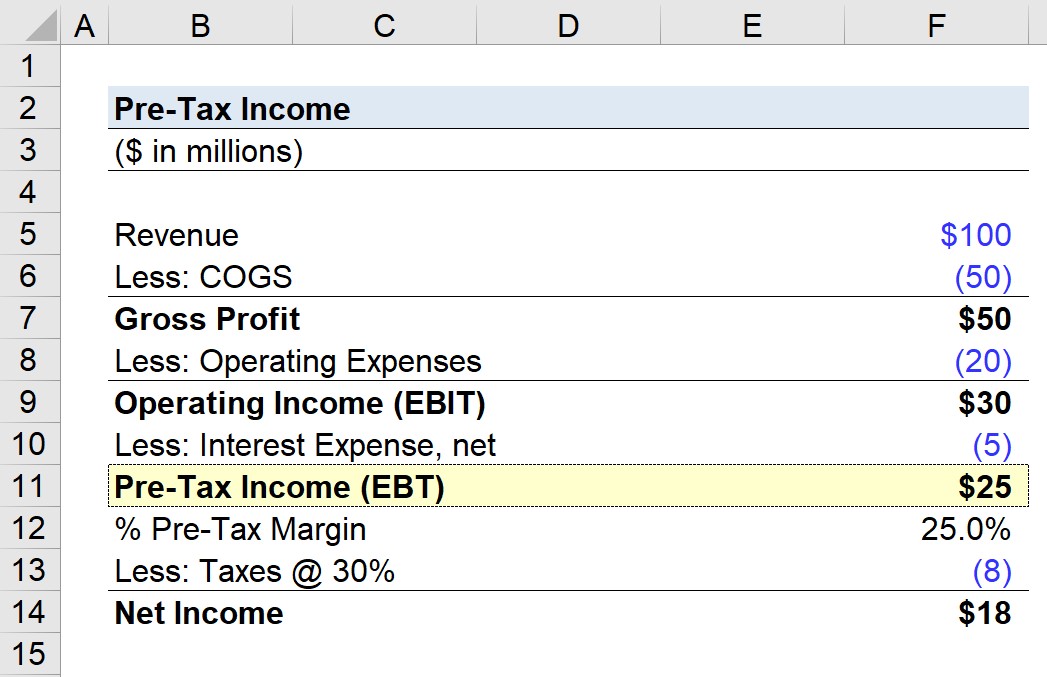