What Does R&D Stand For?

R&D is an abbreviation for “research and development,” and represents the costs associated with product innovation and the introduction of new products/services.

By re-investing a certain amount of earnings into R&D efforts, a company can remain ahead of its competition and thereby fend off any external threats (i.e. shifting industry trends).

Hence, it is crucial for such companies to avoid being blindsided by new disruptive technologies that serve as headwinds to the company.

While R&D costs can easily accumulate over time (and often not create any results of any significance), the R&D can pay off if there is a breakthrough that can directly lead to long-term profitability and a sustainable competitive advantage.

For instance, R&D spending can lead to defensible market positioning through:

The definition of research and development, or “R&D”, is as follows:

Is R&D Capitalized or Expensed?

Under U.S. GAAP, the majority of research and development costs (R&D) must be expensed in the current period due to the uncertainty surrounding any future economic benefit.

Since R&D tends to operate on a longer-term time horizon, these investments are not anticipated to generate immediate benefits.

R&D spending is treated as an expense – i.e. expensed on the income statement on the date incurred – rather than as a long-term investment.

There is some controversy, however, regarding whether this approach is the correct classification given the duration of the benefits.

Considering how long-term the expected economic benefits could be, one could make the case that all R&D should instead be capitalized rather than treated as an expense.

In terms of how research and development expenses are projected in financial models, R&D is typically tied to revenue.

To forecast R&D, the first step would be to calculate the historical R&D as a % of revenue for recent years, followed by the continuation of the trend to project future R&D spending or an average of the past couple of years.

The intuition is that the more revenue growth there is, the more capital could be allocated towards R&D – much like the relationship between revenue and discretionary capital expenditures (Capex).

How to Interpret R&D Spending by Industry

Considering the growth of software across the past two decades, the number of industries prone to disruption has increased substantially, especially with the increased amount of capital available in the private markets to fund these high-growth start-ups.

From a broad perspective, consistent R&D spending enables a company to stay ahead of the curve, while anticipating changes in customer demands or upcoming trends.

As a general rule of thumb, the more technical the industry’s products/services are, the more outsized R&D spending will be.

Depending on the specific sector, the standard spending on R&D will be different, but the industries known for being the most R&D intensive are generally the following:

For many of these companies, R&D becomes the core of their business model as the continuous development and roll-out of newer and more advanced products/services is essential for their continued positive trajectory.

In the sectors mentioned above, R&D shapes the corporate strategy and is how companies provide differentiated offerings.

Given the rate of technological advancement, particularly in countries like the U.S. and China, R&D is integral for companies to stay competitive and create products that are difficult for their competitors to replicate.

“While the pharmaceutical sector garners much attention due to its high R&D spending as a percentage of revenues, a comparison based on industry profits shows that several industries, ranging from high tech to automotive to consumer, are putting more than 20 percent of earnings before interest, taxes, depreciation, and amortization (EBITDA) back into innovation research.” 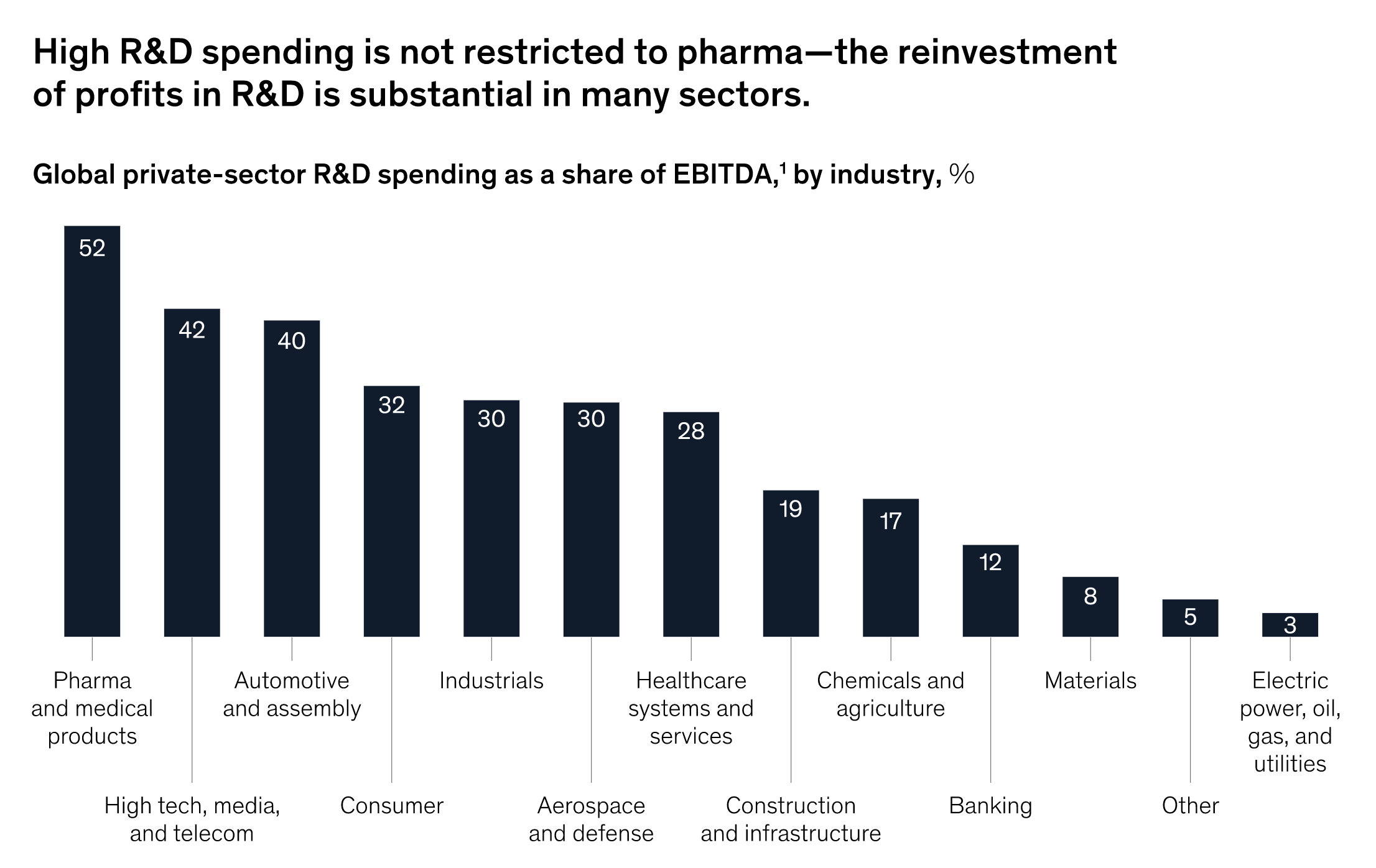