Guide to Understanding the Equity Ratio

What is the Equity Ratio?

The Equity Ratio measures the long-term solvency of a company by comparing its shareholders’ equity to its total assets.

How to Calculate the Equity Ratio

The equity ratio calculates the proportion of a company’s total assets that were financed using capital provided by shareholders.

The equity ratio, or “proprietary ratio”, is used to determine the contribution from shareholders to fund a company’s resources, i.e. the assets belonging to the company.

The purpose of the equity ratio is to estimate the proportion of a company’s assets funded by proprietors, i.e. the shareholders.

In order to calculate the equity ratio, there are three steps:

In practice, the proprietary ratio tends to be a reliable indicator of financial stability, as it provides insights into a company’s current capitalization (and how operations and capital expenditures are financed).

Of course, the ratio by itself is insufficient to understand the fundamentals of a company and should be evaluated in conjunction with other metrics.

Still, the importance of the capital structure cannot be overstated, especially considering how practically all financially sound companies with a long-standing track record have sustainable capital structures well-aligned with their financial profiles.

In contrast, a capital structure that is unmanageable – i.e. the debt burden outweighs the company’s free cash flows (FCFs) – is one of the most common catalysts for corporate restructuring or causing a company to file for bankruptcy protection.

While the ratio cannot determine the optimal capital structure of a company, it can bring attention to an unsustainable reliance on debt financing which may soon lead to default (and potentially liquidation).

The formula for calculating the equity ratio is as follows.

The ratio is expressed in the form of a percentage, so the resulting figure must then be multiplied by 100.

The assets belonging to a company were funded somehow, i.e. either from equity or liabilities, the two primary funding sources:

Intangible assets such as goodwill are normally excluded from the calculation of the ratio, as reflected in the formula.

How to Interpret the Proprietary Ratio

The guidelines for what constitutes a “good” proprietary ratio are industry-specific and are also affected by the company’s fundamentals.

Still, as a general rule of thumb, most companies aim for an equity ratio of around 50%.

Companies with ratios ranging around 50% to 80% tend to be considered “conservative”, while those with ratios between 20% to 40% are deemed “leveraged”.

If the company were to face unexpected headwinds and subsequently underperform, the company could soon be in trouble unless it can obtain more external financing, which can be difficult if the near-term outlook on the economy is negative and the conditions of the credit markets are also bleak.

However, it is also untrue that the higher the ratio, the better off the company, as a near 100% equity ratio is considered “over-conservative.” In such a case, companies are missing out on the benefits of using leverage, such as the interest tax shield and debt financing being a “cheaper” source of capital.

Suppose we’re tasked with calculating the equity ratio for a company in its latest fiscal year, 2021.

At the end of 2021, the company reported the following carrying values on its balance sheet.

Since we’re working to first calculate the total tangible assets metric, we’ll subtract the $10 million in intangibles from the $60 million in total assets, which comes out to $50 million.

With all of the necessary assumptions set, we can simply divide our shareholders’ equity assumption by the total tangible assets to arrive at an equity ratio of 40%.

The 40% equity ratio implies shareholders contributed 40% of the capital used to fund day-to-day operations and capital expenditures, with creditors contributing the remaining 60%. 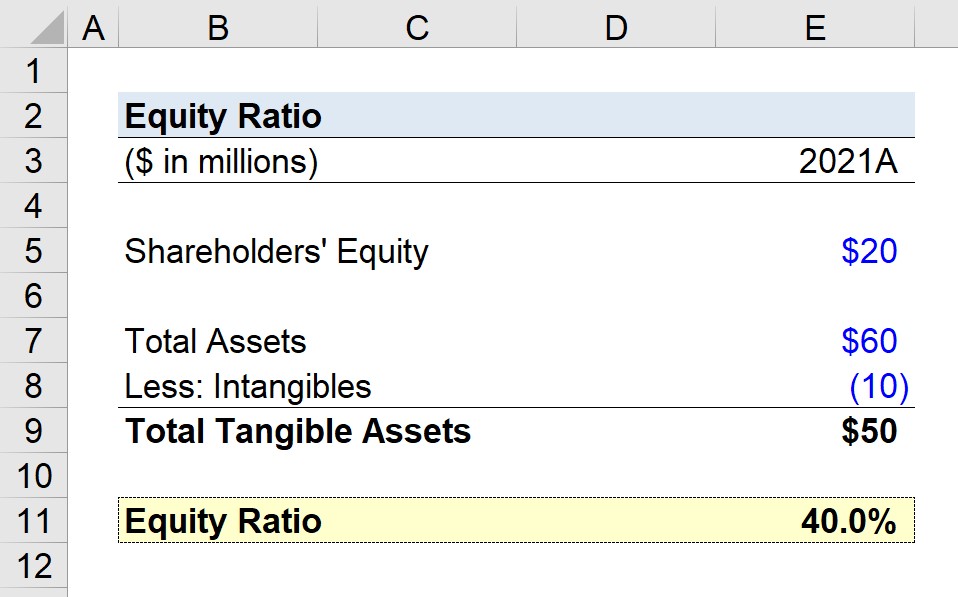