Guide to Understanding the Degree of Financial Leverage (DFL)

What is Degree of Financial Leverage?

Degree of Financial Leverage (DFL) quantifies the sensitivity of a company’s net income (or EPS) to changes in its operating profit (EBIT) as caused by debt financing.

How to Calculate Degree of Financial Leverage (DFL)

Companies can finance the purchase of assets using two sources of capital:

Debt financing comes with fixed financial costs (i.e. interest expense) that remain constant regardless of a company’s performance in a given period.

The higher the degree of financial leverage (DFL), the more volatile a company’s net income (or EPS) will be — all else being equal.

Like operating leverage, financial leverage amplifies the potential returns from positive growth, as well as the losses from declining growth.

The degree of financial leverage (DFL) is a measure of financial risk, i.e. the potential losses from the presence of leverage in a company’s capital structure.

DFL is used to understand the relationship between two metrics of a company:

DFL refers to the sensitivity of a company’s net income — i.e. the cash flows available to equity shareholders — if its operating income were to change.

Alternatively, DFL can be calculated using earnings per share (EPS) rather than net income.

For example, assuming that a company’s DFL is 2.0x, a 10% increase in EBIT should result in a 20% rise in net income.

A more detailed calculation of DFL is comprised of the following five steps.

If we combine those steps into a formula, we are left with the following.

Suppose we have two virtually identical companies with just one exception — one is an all-equity firm whereas the other company has a capital structure with a mixture of debt and equity.

In Year 1, the two companies both brought in $10 million in operating income (EBIT).

As for Year 2, we’ll assess the degree of financial leverage under two cases.

That being said, the Year 2 EBIT values are as follows.

The next step is to calculate the pre-tax income, which requires deducting the annual interest expense.

For the all-equity firm, the pre-tax income is equal to EBIT because there is no debt in the company’s capital structure.

But for the debt-equity firm, the interest expense is equal to the $50 million in debt multiplied by the 10% interest rate, which comes out to $5 million.

The $5 million interest expense can be extended across the two-year periods in both scenarios, as interest is a “fixed” cost, i.e. whether the company performs well or underperforms, the interest due remains unchanged.

The final line item to deduct from pre-tax income before reaching net income is taxes, which we’ll assume is equal to zero for the sake of isolating the impact of leverage.

After that, we’ll calculate the % change in net income and % change in EBIT — the two inputs in our DFL formula — for all four sections.

From our illustrative example, we can see when a company exhibits positive growth in EBIT, debt financing contributes towards greater net income growth (1.0x vs 2.0x).

However, the same impact is seen under negative growth, just in the opposite direction (i.e. the leverage causes greater losses).

Therefore, companies must be cautious when adding debt into their capital structure, as both the favorable and unfavorable effects are magnified. 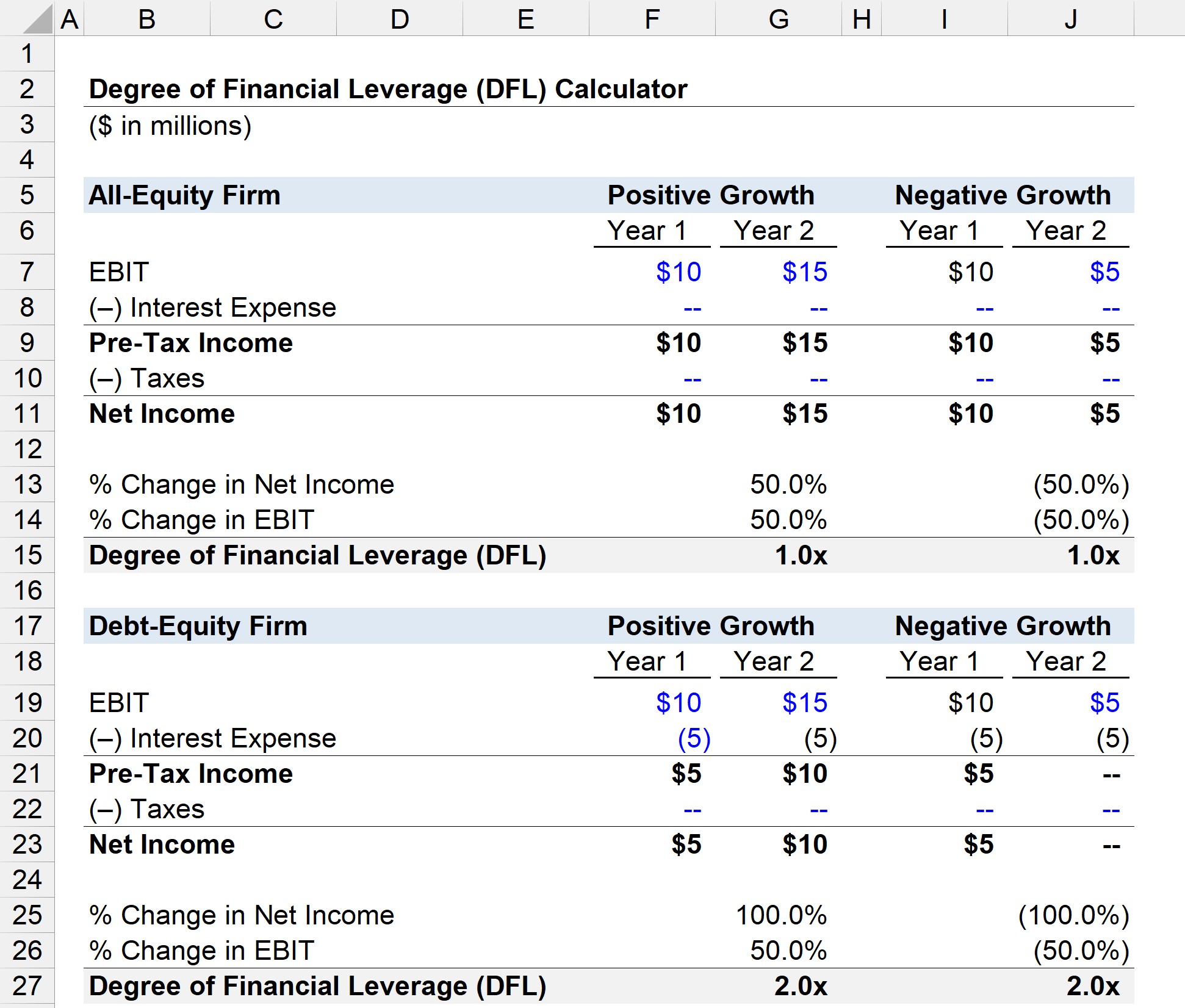