FCFE, or “free cash flow to equity”, measures the amount of cash remaining for equity holders once operating expenses, re-investments, and financing-related outflows have been accounted for.

How to Calculate FCFE

Since FCFE represents the cash left over after meeting all financial obligations and re-investment needs to remain operating, such as capital expenditures (Capex) and net working capital, the metric is often used as a proxy for the amount that a company can return to its shareholders via dividends or share buybacks.

The reason for this is that the effects of debt financing have been removed – namely, interest expense, the “tax shield” (i.e., savings from interest being tax-deductible), and principal debt repayments.

Since FCFE is a “levered” metric, the value of the cash flows must include the impact of financing obligations.

So, rather than representing the cash available to all capital providers, FCFE is the amount remaining for just equity investors.

For instance, the company could use the residual cash to fund:

The clear pattern is that these actions benefit the equity holders.

Contrast this to interest expense or debt repayments, which solely benefit lenders. That said, the FCFE could be equivalent to the FCFF if there is zero debt in the capital structure.

FCFEs can be projected in a levered discounted cash flow model (DCF) to derive to the market value of equity. Furthermore, the correct discount rate to use would be the cost of equity, as the cash flows and discount rate must match up in terms of the represented stakeholders.

However, in practice, the FCFF approach and unlevered DCF are used across most industries. The one notable exception is financial institutions, since their main source of revenue is interest income – making it unfeasible to separate the unlevered FCF since the business model itself is oriented around financing (e.g., interest income, interest expense, provision for losses).

The calculation of FCFF begins with NOPAT, which is a capital-structure neutral metric.

For FCFE, however, we begin with net income, a metric that has already accounted for the interest expense and tax savings from any debt outstanding.

Since FCFE is intended to reflect the cash flows that go only to equity holders, there is no need to add back the interest, interest tax shield, or debt repayments. Instead, we simply add back non-cash items, adjust for the change in NWC, and subtract the CapEx amount.

However, another key distinction is the deduction of the net borrowing, which is equal to the debt borrowed net of the repayment.

The reason we include the debt borrowed, as opposed to just the debt paydown, is that the proceeds from the borrowing could be used to distribute dividends or repurchase shares.

As a side note, typically only the mandatory scheduled debt repayments are included in the calculation of net borrowing.

For example, a cash sweep in an LBO model (i.e., optional repayment of debt) would be excluded because the management could have chosen to use those proceeds instead for other purposes that pertain to equity shareholders.

In comparison, scheduled repayments to lenders are non-discretionary; if they are not paid, the company will default on the debt.

In the next approach, the formula for FCFE starts with cash flow from operations (CFO).

Recall, CFO is calculated by taking net income from the income statement, adding back non-cash charges, and adjusting for the change in NWC, so the remaining steps are to just account for Capex and the net borrowing.

Suppose a company’s net income is $10mm given a 10% net income margin assumption and $100mm in revenue.

Next, our D&A assumption of $5mm is added back since it is a non-cash expense, and then we subtract the $3mm in Capex and $2mm increase in NWC.

In the 2nd example, we begin with cash from operations (CFO) of $13mm, rather than net income.

CFO is equal to the sum of net income and D&A, subtracted by an increase in NWC, i.e. “cash outflow”.

Then, we subtract the $3mm in Capex and $5mm in debt paydown to get $5mm once again. 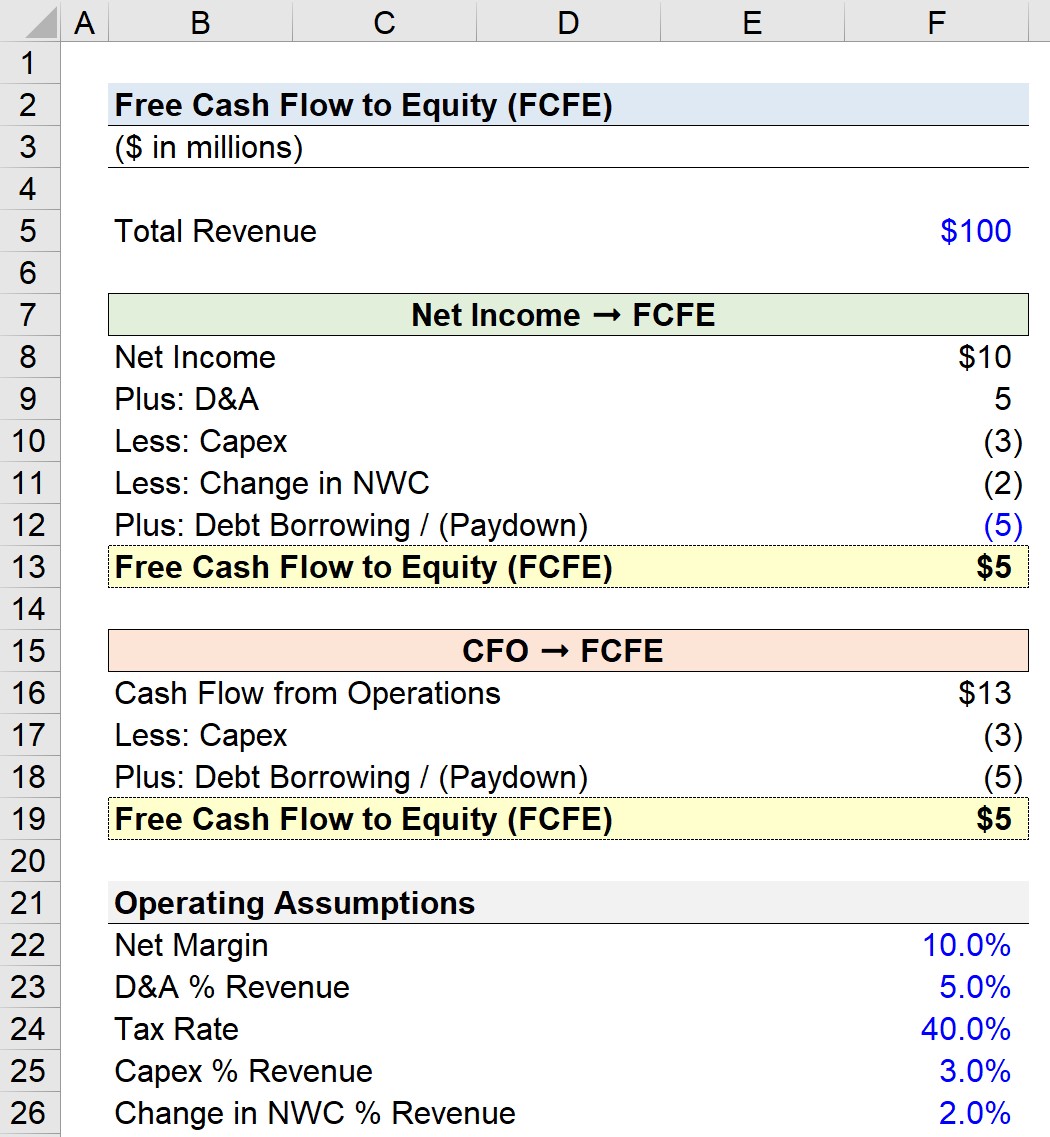 Unlike net income and CFO, EBITDA is capital-structure neutral. Therefore, if we start with EBITDA, we must deduct the impact of debt financing to remove the cash that belongs to lenders.

Within the EBITDA metric, the only debt-related component is the interest, which we subtract. Notice that we just are working down the income statement to net income (or the “bottom line”).

That said, the subsequent step is to account for taxes, and there is no need to make additional adjustments to the tax amount as we want to include the interest tax shield.

Now that we have gone from EBITDA to net income, the same steps apply, where we deduct the change in NWC and Capex. In the final step, we subtract the net borrowing for the period to arrive at the FCFE.

If you’re doing a DCF valuation, do you still need to add cash on hand and minus total debt in the base year when deriving the equity value?

Hi, great post!
One questio i got reading the post. If the change in working capital is negative lets say -10, it will be added to te FCFE formula right? -(-10)
Thanks