Why does Warren Buffett dislike the EBITDA metric?

While EBITDA is among the most widely used metrics in corporate finance, it receives widespread criticism, with Warren Buffett being one of the most outspoken proponents.

According to Buffett, EBITDA is not reflective of a company’s true financial performance due to neglecting capital expenditures (CapEx) and changes in working capital, among various other issues.

Earnings before interest, taxes, depreciation, and amortization, or “EBITDA” for short, is the most widely used proxy for operating cash flow.

In particular, EBITDA is a useful metric for facilitating comparisons because EBITDA is independent of the capital structure – i.e. unaffected by financing decisions – as well as the tax rates.

However, EBITDA receives significant criticism for its many flaws, especially the fact that EBITDA does NOT account for two major cash outflows:

EBITDA, unlike metrics such as operating income (EBIT) and net income, is a non-GAAP metric that is affected by management discretion on which items to add back or deduct.

While in theory, the adjustments are performed to portray the core recurring financial performance of the company, the lack of standardization and room for subjective judgment can lead to “creativity” in terms of how EBITDA is calculated.

By removing non-operational and non-recurring expenses, EBITDA is meant to depict a clearer picture of the profitability of a company.

EBITDA has become widespread to the point that public filings have a separate section for the EBITDA reconciliation – albeit EBITDA is still not recognized as a formal GAAP metric under accrual accounting.

For example, many companies nowadays claim to become profitable, but only on an adjusted EBITDA basis (which is often inclusive of many subjective adjustments).

As a result, using EBITDA as a standalone profitability metric can be misleading, especially for capital-intensive companies.

While EBITDA does indeed add back depreciation and amortization (D&A), usually the largest non-cash expense, the metric fails to capture the full cash impact of CapEx or changes in working capital.

To properly assess a company’s past operational performance and to accurately forecast its future cash flows, non-cash expenses like D&A and non-recurring adjustments must be properly factored in.

EBITDA also does not always adjust for stock-based compensation, although the more prevalent “adjusted EBITDA” metric does often add it back.

Often referred to as “scrubbing” the financials, adjusting for non-recurring items is meant to normalize the company’s cash flows and more accurately depict a company’s operating performance.

Given how EBITDA neglects CapEx, Buffett does NOT believe EBITDA is a true representation of a company’s financial performance, especially if management is deemed trustworthy.

The point is not that EBITDA is a flawed measure of profitability that should not be used, but rather, it is important to be aware of the metric’s shortcomings.

To summarize, EBITDA can make unprofitable companies appear profitable since EBITDA ignores depreciation and amortization as well as interest and taxes.

Yet, despite these shortcomings, EBITDA remains the industry standard for evaluating companies and the most widely used proxy for operating cash flow.

Now that we’ve explained the flaws of the EBITDA metric, we can complete an example modeling exercise in Excel. Fill out the form below to access the file:

In our example scenario, we have two companies where the only difference is the D&A assumption.

Company A and Company B thus both have a gross profit of $40m.

On paper, Company B technically earns “nothing” in terms of operating income (EBIT) while Company A has $20m in EBIT – despite the two having identical EBITDA values.

At first glance, the majority of investors would likely be indifferent to which company is more profitable.

In reality, the non-cash add-back of D&A is the sole cause behind the identical EBITDA values, and concluding that the profitability of the two companies is identical would be a mistake. 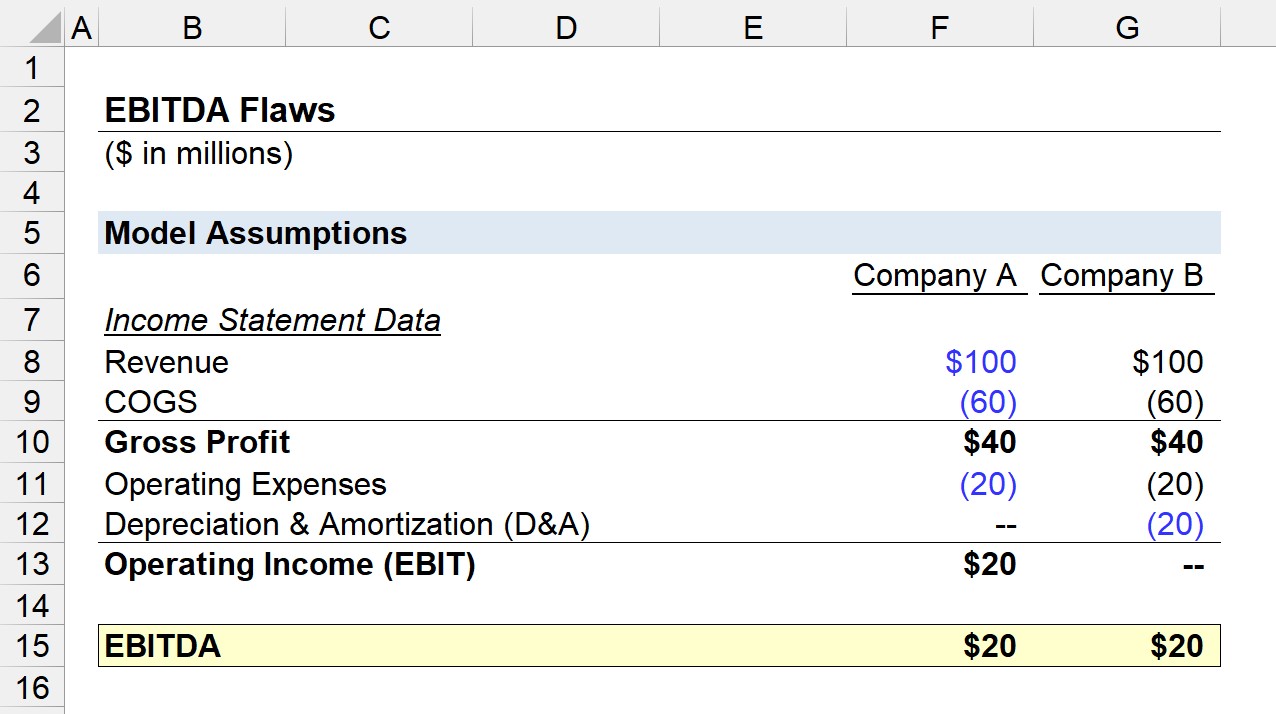