Guide to Understanding the Gross Margin

What is Gross Margin?

The Gross Margin represents the amount of revenue left over after deducting the cost of goods sold (COGS) incurred in the period.

Since only direct costs are accounted for in the metric, the gross margin shows how much in profits remains available for meeting fixed costs and other non-operating expenses.

How to Calculate Gross Margin (Step-by-Step)

Calculating a company’s gross margin involves dividing its gross profit by the revenue in the matching period, which are both metrics found on the GAAP-based income statement.

The gross margin metric answers the following question, “How much in gross profits is kept for each dollar of revenue?”

In accordance with GAAP accounting standards, the cost of goods sold (COGS) are matched to the associated revenues in the same time period, which is commonly known as the “matching principle”.

Common examples of costs recognized under the cost of goods sold (COGS) line item include the following:

The process of calculating the gross profit margin is as follows:

The formula to calculate the gross profit margin is as follows.

In order to express the metric in percentage form, the resulting decimal value figure must be multiplied by 100.

For example, if a company has generated $10 million in revenue with $3 million in COGS, the gross profit is $7 million.

What is a Good Gross Profit Margin?

Interpreting a company’s gross margin as either “good” or “bad” depends substantially on the industry in which the company operates. For any comparisons to be useful, the companies must operate in the same or similar industry with available historical data dating back several years to get a better sense of the industry norm (and patterns).

As one would reasonably expect, higher gross margins are usually viewed in a positive light, as the potential for higher operating margins and net profit margins increases. An accurate assessment of the gross profit metric depends, however, on understanding the industry dynamics and the company’s current business model.

How to Increase Gross Margin Percentage (%)

A couple of common methods for companies to increase their gross margin are the following:

Apple’s gross profit line item is highlighted in the screenshot below.

The only adjustment made to Apple’s revenue each fiscal year is “Cost of Sales”, as we discussed earlier.

Once deducted, the gross margin percentage can be computed by dividing gross profit by the amount of revenue generated in the corresponding period.

Gross Margin vs. Net Profit Margin: What is the Difference?

The fact that net income is “levered” (i.e. post-debt) and flows solely to equity holders is one of the primary drawbacks to the net margin metric.

In contrast, the gross profit margin accounts for just one outflow of cash, which is the direct costs associated with the production of revenue.

For our example modeling exercise, we’ll be calculating and comparing the gross profit margin of three companies, with each having different revenue and COGS assumptions.

We’ll start by listing out the revenue and cost of goods sold (COGS) assumptions for each company.

Using these figures, we can calculate the gross profit for each company by subtracting COGS from revenue.

Next, the gross profit would be divided by revenue to get the gross margin.

Despite the differences in operating expenses (OpEx), interest expenses, and tax rates among these companies, none of these differences are captured in the gross margin.

The gross margin isolates the profits only after COGS is factored in, which makes the metric more informative for peer group comparisons.

Since COGS were already taken into account, the remaining funds are available to be used to pay operating expenses (OpEx), interest expenses, and taxes.

As in the case of all profitability metrics, the gross margin should be used in conjunction with other metrics to fully understand the cost structure and business model of the company. 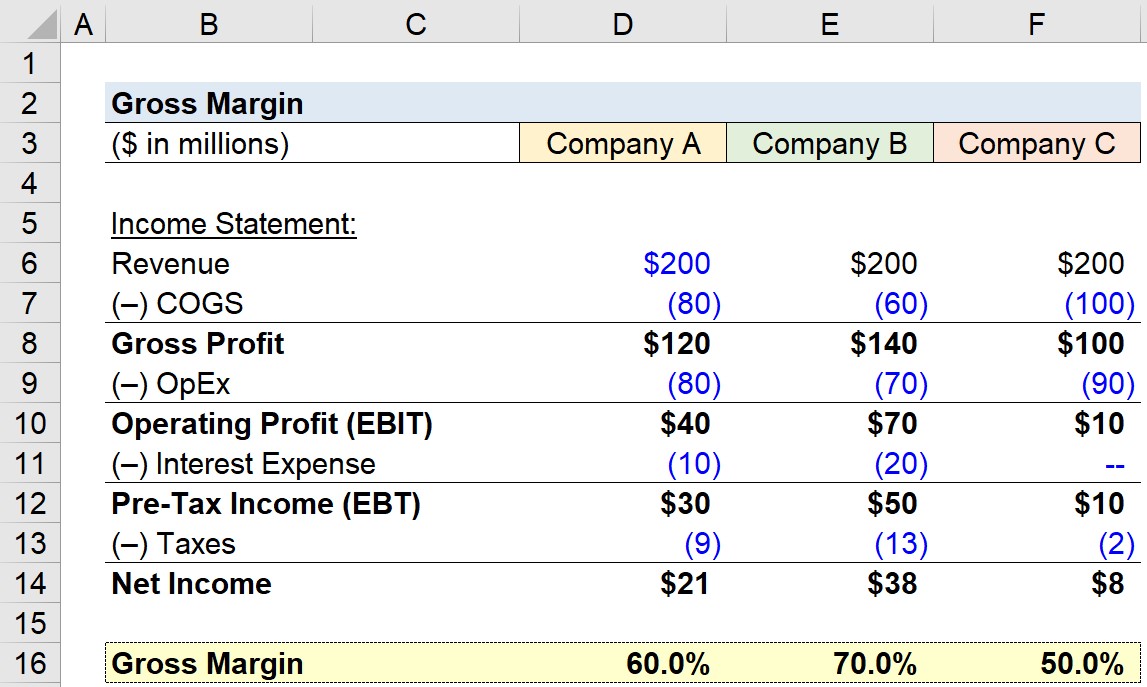