What is the Viral Coefficient?

The Viral Coefficient (k) estimates the number of new users that the average customer can refer to a given company’s products and/or services.

While there are various metrics available to predict a company’s future growth rate such as the MAU/DAU ratio and the net promoter score (NPS), the viral coefficient is unique since it measures the magnitude to which users are recommending a product or a service to others.

The viral coefficient, or “k-factor”, measures the effectiveness of existing users acting as a marketing channel, which is a crucial predictor of a company’s long-term growth trajectory.

The concept of virality describes the growth of a platform from organic word-of-mouth referrals, in which the company’s marketing efforts seemingly take off on their own.

If a company’s product provides sufficient value to its users — at least in theory — many users are likely to share invitations with their peers and acquaintances.

Especially relevant to early-stage startups with high burn rates and short implied runways — customers speaking positively about the features of their products reduces the burden placed on the sales and marketing team.

The viral coefficient is a growth marketing tool used to measure the scalability of a platform, with an understanding that there is a ceiling to how broad of an audience the company’s marketing efforts can ultimately reach.

Companies frequently send surveys to existing customers asking them how the user initially heard about the product in an effort to understand where to focus their marketing efforts.

To incentivize customers to share invitations with their networks, companies often attach an incentive, e.g. a referral code with a $10 reward if the referred user makes a purchase.

Besides growth in the user count and high retention rates among existing users on the platform, organic word-of-mouth promotion by customers is perceived to be a positive sign in validating the product’s value proposition and demand within a target market.

How to Calculate the Viral Coefficient (Step-by-Step)

There are two inputs required to calculate the viral coefficient:

The steps to calculate the viral coefficient can be broken into four stages:

The formula for calculating the viral coefficient is as follows.

By taking the average referral conversion rate into account, the viral coefficient metric goes beyond simply counting the gross number of referrals all customers have made — but rather, the metric only considers the number of referrals that converted.

If the viral coefficient is >1, the average user refers one more user to the platform.

That said, the higher the viral coefficient, the more exponential growth there is.

As a general rule of thumb, the viral coefficient must exceed 1 for a company to achieve viral growth.

However, a company’s reliance on external customer marketing varies case-by-case, so the metric must be tracked alongside other measures.

Virality vs. Network Effects: What is the Difference?

Unlike network effects, virality is more growth-oriented and focused on accelerating user growth to reach a state of so-called “hyper-growth.”

The viral coefficient is a reliable indicator of a startup’s growth trajectory and sustainability because eventually, at some point, existing users must start to market the product themselves for a startup to achieve high growth and raise more capital from venture capital investors.

Scalability is a priority for most startups, especially for those with business models wherein reaching the break-even point (i.e. turning a profit) is unfeasible in the absence of a sizeable user base.

In contrast, network effects are more about the relationship between the number of users active on a platform and the incremental improvement in the product and/or service from the increased user base.

Thus, network effects focus on value-creation and improving the end-user experience on the platform, while virality hones in on external word-of-mouth marketing.

A real-life example of virality would be a clip on YouTube being shared across various social media platforms.

Despite the higher view count, the value of the clip remains constant for the most part, whether it has one view or one million views.

Conversely, an example of network effects is Uber / Lyft, where more drivers on the platform cause the ride experience to improve (e.g. reduction in wait time, more optionality to pick from, and lower fares).

Suppose a startup had 20 customers in Year 0, in which the average number of referrals per customer was ten and the referral conversion rate was 20%.

By multiplying the number of referrals by the conversion rate, we arrive at a viral coefficient of 2.0x.

Startups seeking virality must possess a viral coefficient greater than 1.0x, as seen in this example.

Using those assumptions, we’ll now assess the customer growth profile of our hypothetical company for the next four years.

In Year 1, the number of new customers from the prior period is 20, and we’ll multiply that figure by 10, i.e. the number of referrals per customer.

Given the total number of referrals sent — 200 in Year 1 — the amount must be multiplied by our 20% conversion rate assumption, so 40 new customers were added in Year 1.

The rationale for only applying the conversion rate to the new users in each period is because the number of referrals from existing users wanes after the initial period (and is less reliable).

From Year 1 to Year 4, our company’s ending customer count expanded from 60 to 620, reflecting how a company’s growth can be accelerated by word-of-mouth marketing. 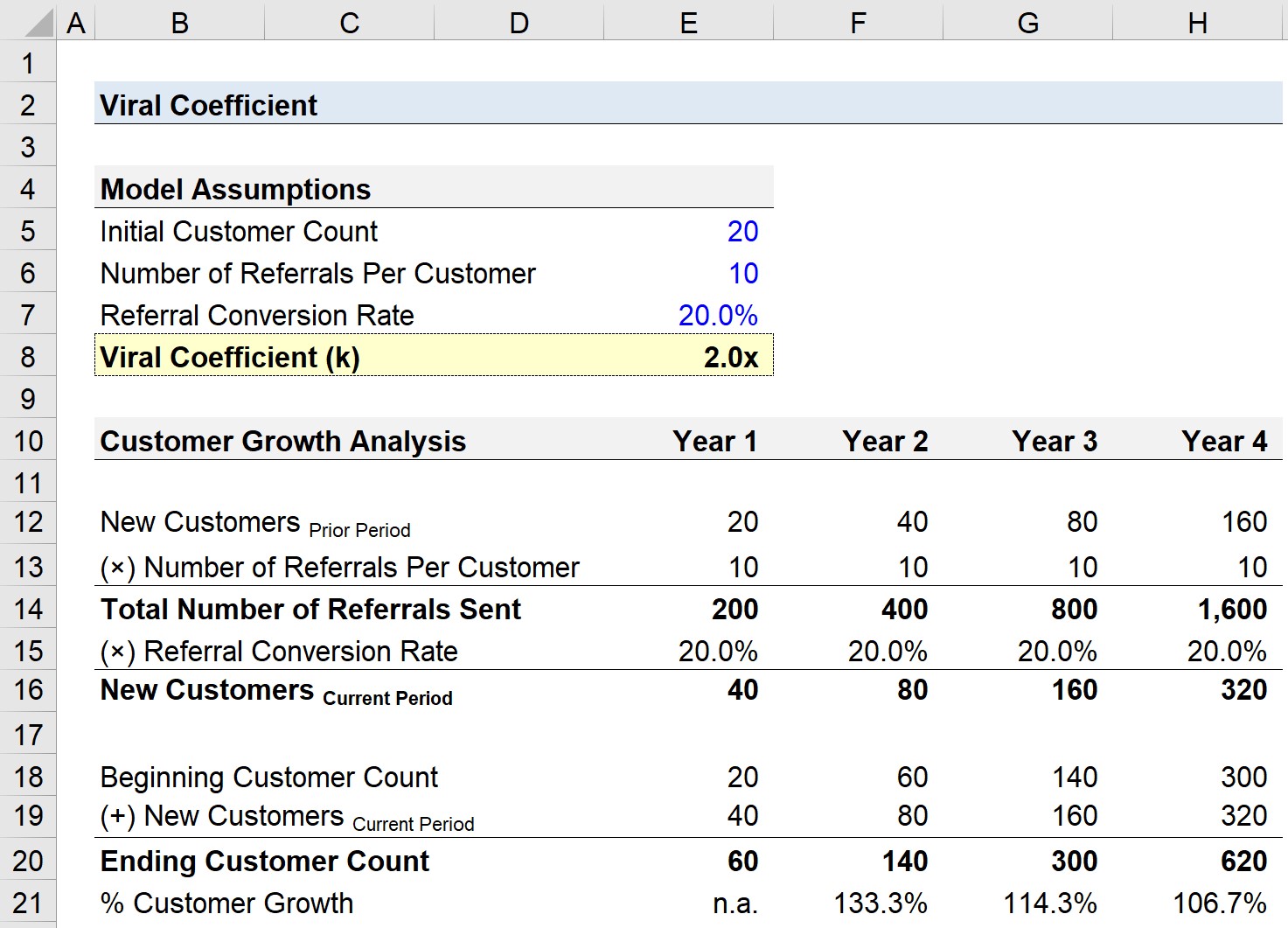