What is the Trial Conversion Rate?

The Trial Conversion Rate refers to the percentage of free users that convert to paid users over a defined period of time.

How to Calculate the Trial Conversion Rate

The trial conversion rate metric is of particular importance to companies with a “freemium” business model.

Under the freemium business model, a company’s go-to-market, customer acquisition strategy is to offer potential customers the opportunity to first use their product at no cost.

While there are several variations of the freemium pricing model, the two most common strategies are offering free trials and/or a free product with limited features.

The rationale for companies offering their product (or a basic version) for free – either on a temporary or perpetual basis – is to establish a foundation for ultimately upselling the potential customer.

Furthermore, the freemium strategy enables companies to build their user base without the need to spend substantial sums of money on marketing campaigns and sales initiatives.

Even if a customer does not convert, the company can still collect insights from the feedback of the customers that decided not to purchase the product – which over the long run, can arguably be more beneficial to the company’s longevity by improving its understanding of the target end market (and customer spending patterns).

In a sense, both the customer and the company educate each other (i.e. customers provide valuable customer insights in exchange for the free usage of the product).

As a real-world example, cloud storage provider Dropbox (NASDAQ: DBX) is among many companies nowadays that utilize a freemium strategy.

Dropbox offers consumers and enterprises three paid options to pick from, which can be billed on a monthly or annual basis.

The screenshot below displays the various pricing plans that Dropbox offers to its customers, along with the free option (i.e. “Dropbox Basic”). 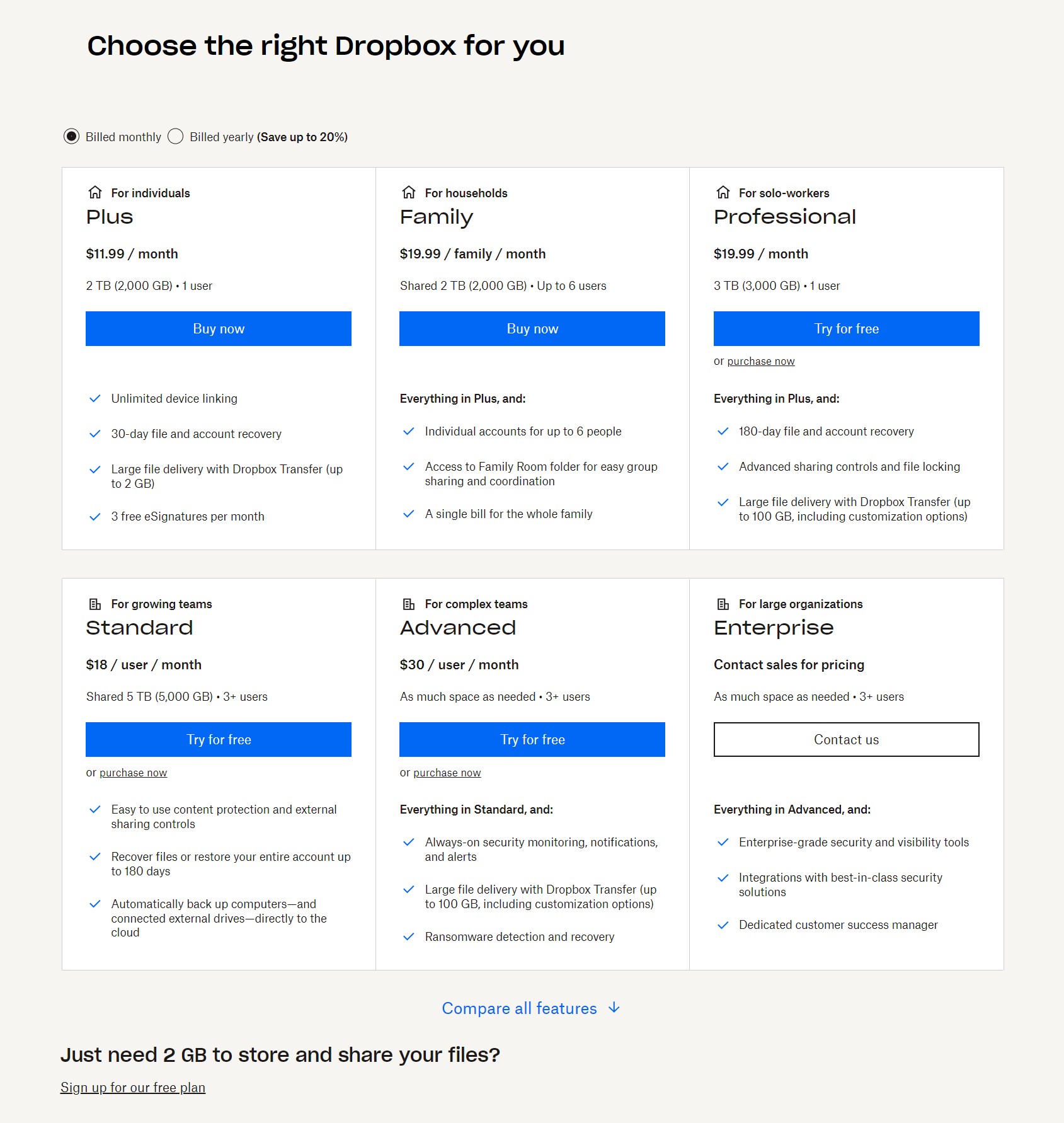 “Choose the Right Dropbox For You” (Source: Dropbox)

While all the other pricing options present their features (i.e. higher pricing = more storage + additional sharing and security features), the free plan placed at the bottom states, “Just need 2 GB to store and share your files?”

Conversions often stem from users downloading the free basic version and continuing to use the product until the user realizes the value in the locked functionalities (and decides to then upgrade to a paid tier).

In the case of Dropbox, the ideal scenario would be a customer running out of space in their free plan and/or wanting additional features such as large file deliveries and stricter file security (and the customer has also been enjoying the user experience thus far).

The formula for calculating the trial conversion rate is as follows.

Suppose we’re tasked with calculating the trial conversion rate of Dropbox as of the end of 2021.

In February 2022, Dropbox announced its financial results via a press release from the trailing twelve months as part of the filing of its annual report (10-K).

The “Fourth Quarter Fiscal 2021 Results” section states the number of paying users at the end of 2021 was 16.79 million, while the “About Dropbox” section says the total number of registered users is more than 700 million.

Since the number of registered users is expressed broadly as an approximation, rather than a precise figure, our calculation will inevitably be off.

We’ll also assume that the number of free-to-paid users represents all paying users, which is not accurate since certain users purchased a paid plan without the need to test out the free plan.

Usually, the time period covered for the calculation of the metric should be a shorter term, since there is the option to isolate the period and accurately determine the amount of conversions.

For instance, Dropbox does not disclose precise numbers for its total registered users. While most would reasonably estimate “more than 700 million users” as being close to 700 million, that wide potential range can make a substantial difference to the company’s revenue, especially considering the number of paying users was only 16.79 million.

There are also numerous variables that can skew the data, namely the number of users with multiple accounts and inactive accounts.

Still, we can compute a trial conversion rate as a rough proxy for how efficient Dropbox is at converting its free users into paid users.

After dividing Dropbox’s free-to-paid users by its total number of registered users, we arrive at a trial conversion rate of 2.4%. 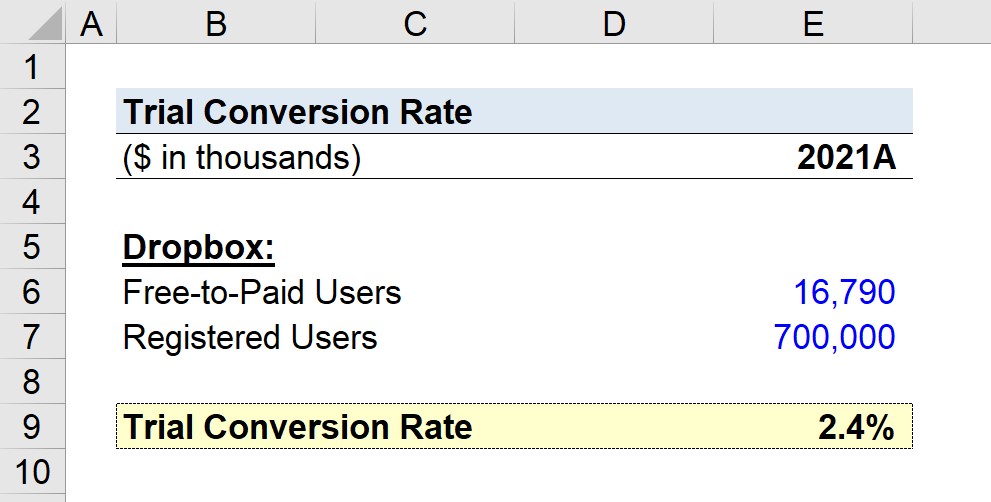