Annual Recurring Revenue (ARR) estimates the predictable revenue generated per year by a SaaS company from customers on either a subscription plan or a multi-year contract.

How to Calculate ARR (Step-by-Step)

While not a GAAP metric, ARR captures a SaaS company’s historical (and future) financial performance more accurately than the revenue recognized under accrual accounting standards.

Typically, ARR is the primary metric used to measure the health of SaaS and other subscription-based companies with business models oriented around recurring revenue and multi-year contracts, particularly for forecasting year-over-year (YoY) growth.

Since ARR represents the revenue expected to repeat into the future, the metric is most useful for tracking trends and predicting growth, as well as for identifying the strengths (or weaknesses) of the company.

The ARR metric is a company’s total recurring revenue as expressed on an annualized basis.

Conceptually, the ARR metric can be thought of as the annualized MRR of subscription-based businesses.

In order to properly calculate the metric, one-time fees such as set-up fees, professional service (or consulting) fees, and installation costs must be excluded, since they are one-time/non-recurring.

For example, let’s say a customer negotiated and agreed to a four-year contract for a subscription service for a total of $50,000 over the contract term.

Suppose we’re projecting the annual recurring revenue (ARR) of a SaaS company that ended December 2021 with $4 million in ARR.

The ending ARR will be equal to the beginning ARR plus the net new ARR, which is composed of three factors:

In both months, the churn rate and expansion ARR will be estimated as 6% and 2% respectively.

The new ARR will be hard coded for January and February, and then the beginning ARR will be multiplied by the respective churn rate and upsell assumptions.

Since we now have all the necessary inputs for the ARR roll-forward schedule, we can calculate the new net ARR for both months.

The ending ARR for January comes out to $4,040,000, which becomes the beginning ARR for February. 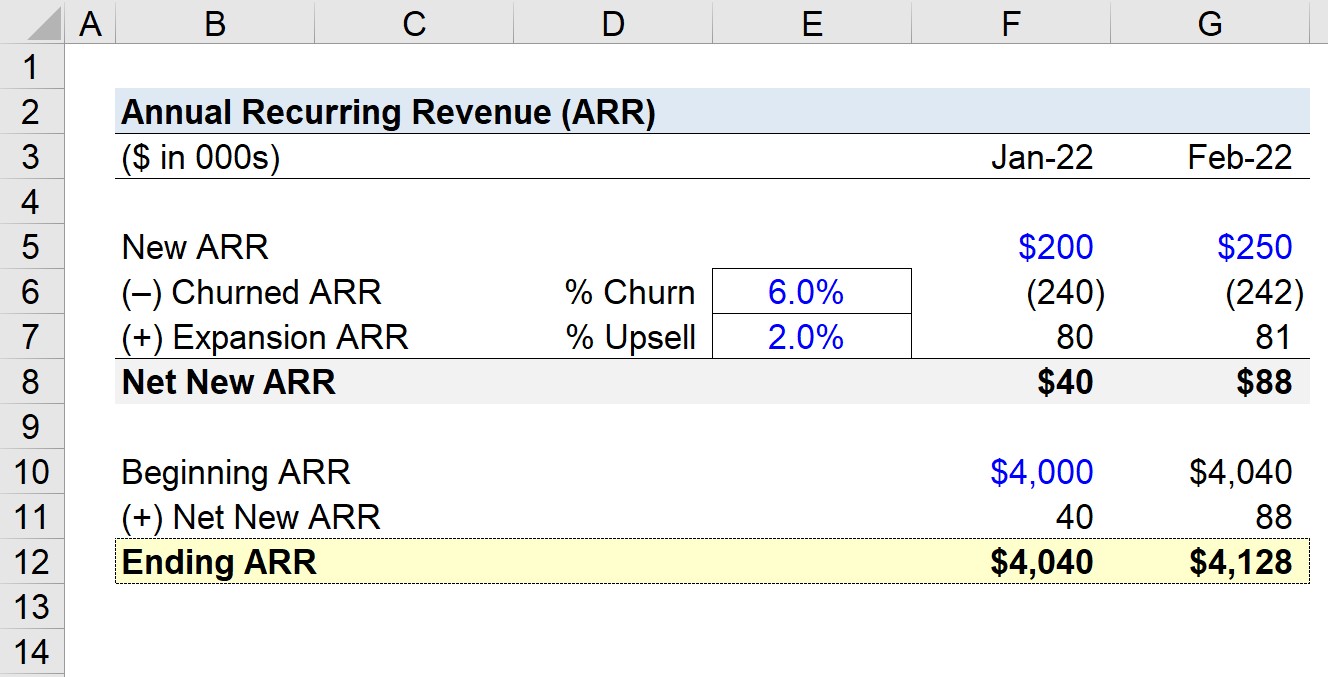