Guide to Understanding the Hype Factor

What is the Hype Factor?

The Hype Factor is a ratio that compares the amount of capital raised by a startup to its annual recurring revenue (ARR).

How to Calculate the Hype Factor

In short, the hype ratio determines whether the “hype” surrounding a startup is justified by its annual recurring revenue (ARR).

Like the Bessemer Efficiency Score, venture capital (VC) firms tend to pay more attention to a company’s capital allocation and spending habits once a slowdown in the economy (and capital markets) is anticipated.

While in periods where funding is abundant and readily available, startups often prioritize revenue growth (i.e. the “top line”) above all else, especially in more competitive markets.

However, an economic contraction can soon change the topic from revenue and user base growth to how efficiently a company can convert the capital raised from outside institutional investors into ARR.

ARR represents “actual” value since it represents future GAAP revenue, whereas the concept of “hype” is immeasurable, yet the impact it can have on the future performance of companies is undeniable.

Benchmarks for Interpreting the Hype Factor

According to Kellogg, the hype factor should be interpreted using the following guidelines.

Historically, the typical hype factor of software companies on the verge of an initial public offering (IPO) is around 1.5.

The formula for calculating the hype factor is as follows.

The formula is the ratio between 1) the amount of capital raised by the startup and 2) the startup’s annual recurring revenue (ARR).

Suppose we’re calculating the hype factor of two different startups, which we’ll refer to as “Company A” and “Company B”.

Both companies are projected to generate approximately $20 million in annual recurring revenue (ARR) in 2022.

The distinction between the two companies, however, is that Company A raised $100 million in investor capital while Company B only raised $40 million.

With that said, Company B clearly appears to be more efficient at converting investor capital into ARR, which our hype factor will soon confirm.

For Company A and B, we’ll divide the capital raised by the ARR to arrive at the hype factor.

In comparison, Company B seems to be in much better shape, as Company A does not generate enough ARR to warrant the $100 million in capital raised. 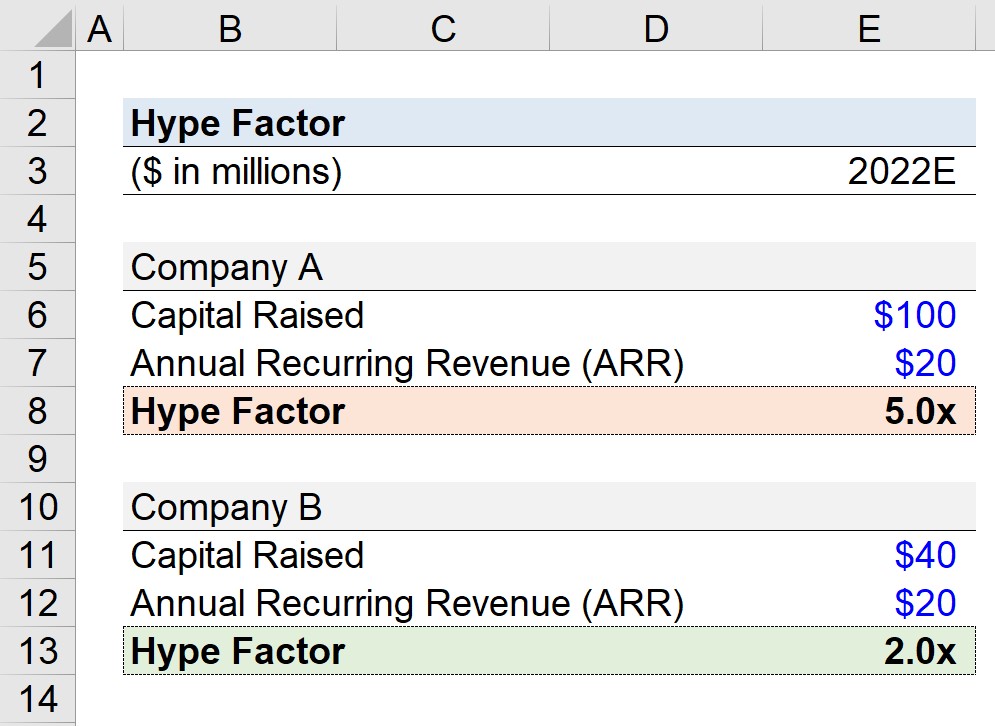