What is the ARPA?

ARPA, or “average revenue per account”, quantifies a SaaS or subscription-based company’s average monthly recurring revenue (MRR) per account and is most often segmented into distinct cohorts (groups) of customers.

How to Calculate ARPA

ARPA, short for “average revenue per account,” refers to the subscription or contractually recurring revenue generated per account.

Like most SaaS KPIs, ARPA is one method for companies to develop a better sense of their customer base and how their spending reacts to specific changes.

Usually, ARPA is expressed on a monthly or annual basis and is calculated by dividing a company’s monthly recurring revenue (MRR) by the total number of active accounts.

The formula to calculate average revenue per account is as follows.

MRR can also be replaced with annual recurring revenue (ARR) to annualize the metric.

The period chosen (i.e. monthly vs. annual) should depend on how the subscription businesses being assessed operate (monthly vs. longer-term contracts) and the purpose of the analysis (i.e. customer cohort analysis, long-term revenue forecasting).

In practice, the primary use case for calculating the ARPA is comparing cohorts of accounts, which can be categorized by customer type, the month onboarded, and various other factors.

Note that customers who were offered a free trial must be excluded from the calculation – otherwise, ARPA will be unnecessarily weighed down by a freemium strategy.

While the distinction is usually negligible, the distinction can be quite significant in certain cases as a single customer can be the owner of multiple accounts (i.e. per-user or per-seat pricing plans).

Having one customer owning multiple accounts is most common for B2B companies (i.e. a company purchasing licenses for multiple employees).

Since averaging the total revenue brought in can be overly simplistic – as in the case of ARPU –  SaaS companies can opt to segment them into two categories.

By doing so, a company can better understand the behavior of its customers and make appropriate adjustments to its business model, e.g. setting the pricing appropriately, targeting the right customers, and identifying common causes of customer churn.

The issue with the ARPU metric for SaaS companies is that an outlier – an account in which revenue is highly concentrated – can skew the average and potentially conceal a decrease in revenue per account.

If there is a large difference between new and existing ARPA, it could potentially signify that ARPA is trending in the wrong direction.

On the other hand, having a new ARPA that is higher than the existing ARPA clearly indicates that the company is monetizing its users more effectively than in the past.

Additionally, ARPA can show companies which specific products have the most demand, the end markets most receptive to the products, and which customer types to target to maximize profitability.

Suppose a SaaS company has 10,500 accounts in January 2022, with zero customer churn in the next month.

Based on a cut-off date, the company’s customers are split into existing and new accounts.

In January, the monthly recurring revenue (MRR) of both customer types is shown below:

If we divide the MRR by the corresponding cohort’s number of accounts, we arrive at the following figures:

However, the drop-off in revenue from new accounts is not reflected by the total MRR (if we did not segment the customers by type).

The increase in ARPA from existing accounts was insignificant but still enough to offset the entirety of the lost ARPA from new accounts.

If the company’s new ARPA had increased over time, that would have been a positive indicator that the current go-to-market strategy and sales and marketing efforts were paying off.

But in this example, the opposite was observed, as the recent changes led to a decline in MRR per account and greater reliance on previously acquired accounts, which is not ideal. 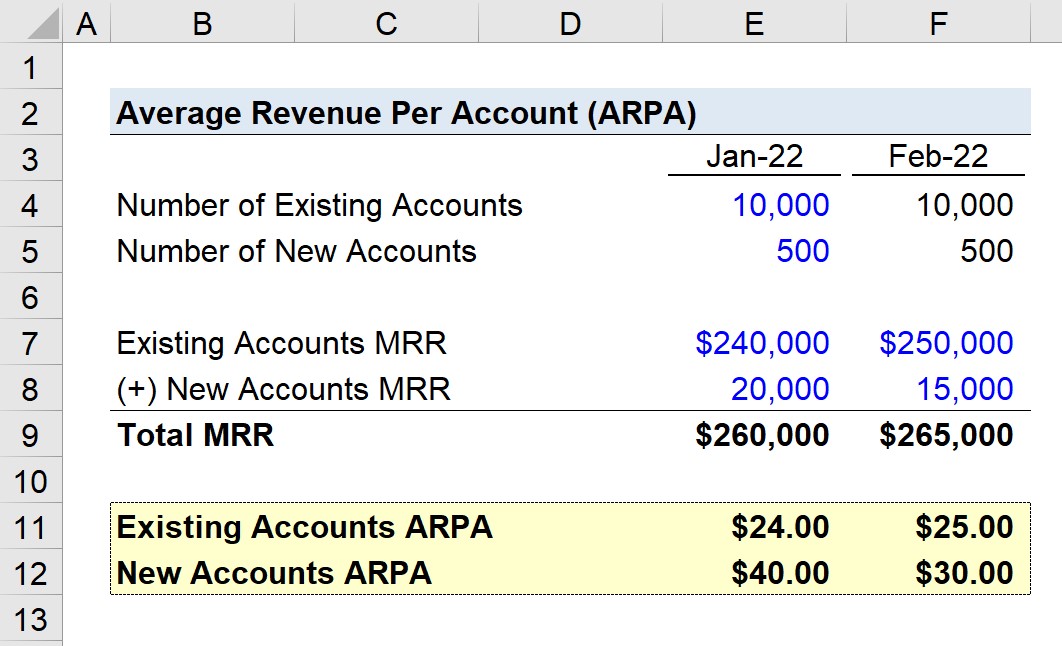