What is Revenue Churn?

Revenue Churn measures the percentage of recurring revenue that a company lost due to customer cancellations, non-renewals, and account downgrades in a given period.

How to Calculate Revenue Churn Rate

In the context of SaaS companies, the gross revenue churn rate represents the losses resulting from existing customers either canceling their subscriptions or refusing to renew a contract.

Subscription-based companies aim to maximize their recurring revenue, which is achieved by ensuring that their customer churn (and revenue churn) remains low.

Customer churn and revenue churn are two of the most important metrics for SaaS companies to track, but revenue churn tends to be more informative in terms of understanding the monetization of the user base.

For instance, a company could be losing customers, which would typically be perceived negatively (and a cause for concern).

Yet, the company’s recurring revenue in such a case could still be growing as a result of obtaining greater revenue from its existing customers.

The monthly recurring revenue (MRR) refers to the proportion of a company’s total revenue per month that is considered predictable due to being contractual, i.e. from a subscription-based pricing plan.

If a subscriber decides to cancel or downgrade an existing subscription, the provider’s MRR would subsequently decline.

MRR is arguably the most important key performance indicator (KPI) for SaaS companies, so it makes sense that churn must ideally be kept to a minimum.

There are two methods to measure churn, either on a gross or net basis:

To expand further on the latter point, expansion revenue can come in numerous forms, such as the following:

For example, if a SaaS company with $20 million in MRR lost $5 million in that specific month, the gross churn is 25%.

Unlike the prior metric, which only considers the MRR lost from existing contracts, the net churn factors in expansion revenue.

Continuing from the previous example, let’s say that the SaaS company was able to bring in $3 million in expansion revenue.

Expansion revenue must be netted against price decreases or downgrades to a lower tier account by existing customers, so the $3 million in expansion revenue offset some losses from customer cancellations.

But net churn expands upon the gross churn by factoring in how well a company can increase the revenue contributed per customer.

A negative net revenue churn occurs when a company’s expansion revenue exceeds the churned MRR from customer cancellations and downgrades.

Thus, a negative MRR churn rate is a positive signal, as it implies that the expansion revenue from existing customers offsets the churned revenue entirely (and more).

Suppose we’re tasked with calculating the MRR churn of a SaaS company on a gross and net MRR churn basis.

For the first part of our exercise, we’ll calculate the company’s gross MRR churn, which equals the churned MRR from downgrades and cancellations divided by the MRR at the beginning of the month.

In January 2022 (Month 1), the company generated $100,000 in MRR at the end of the previous month, which is equal to the beginning MRR in the current month.

Moreover, the churned MRR – as caused by downgrades and cancellations – was 4% of the beginning MRR.

By multiplying the beginning MRR by the churn rate assumption, the churned MRR is $4,000 for the month.

While the gross MRR churn was an explicit assumption, the rate could be calculated by dividing the churned MRR by the beginning MRR.

In the next part, we’ll calculate the net revenue churn using the same assumptions as before, except for one difference.

The expansion revenue of the company will now be assumed to be 2% of the beginning MRR.

If we net the expansion MRR against the churned MRR, we are left with $2,000 as the net change to MRR.

The net churn can now be calculated by dividing the net churn by the beginning MRR, which comes out to a rate of 2%, as shown by the equation below.

Despite losing $4,000 from cancellations and non-renewals, the SaaS company was able to lessen the negative impact with $2,000 in upsells for the month of January. 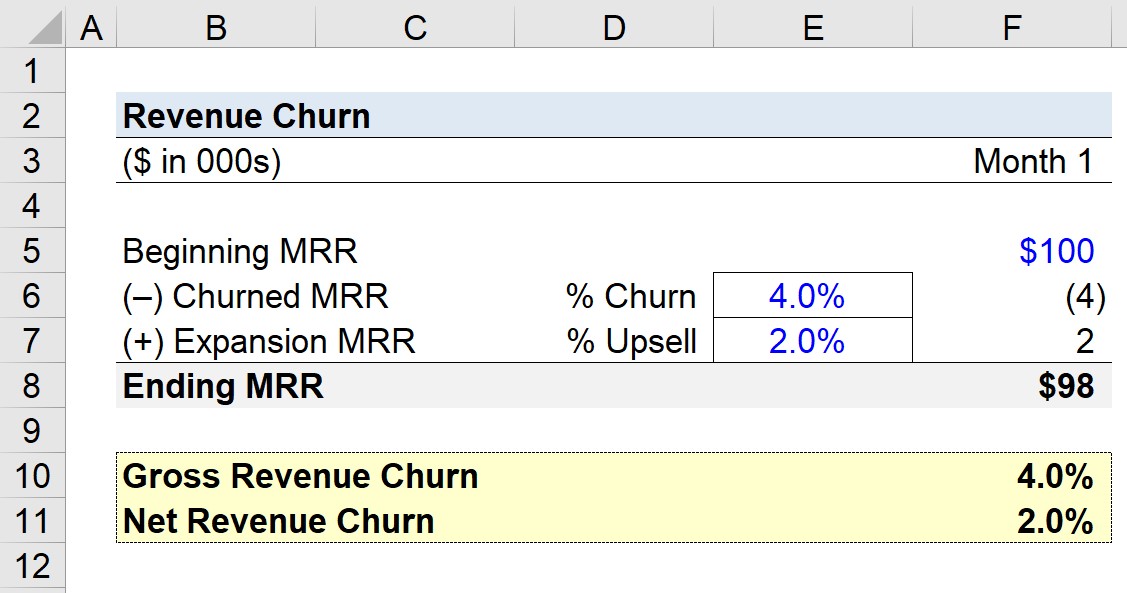