What is the CAC Payback Period?

The CAC Payback Period refers to the number of months needed by a company to recoup the initial costs incurred in the process of acquiring a new customer.

How to Calculate the CAC Payback Period

The CAC payback period is a SaaS metric that measures the time it takes a company to earn back their spending on new customer acquisitions, namely their sales and marketing expenses.

The CAC payback period is also known as the “months to recover CAC”.

The metric determines the amount of cash necessary for a company to fund its growth strategies, i.e. it sets the ceiling for how much can be reasonably spent on acquiring new customers.

The CAC payback period formula is comprised of three components:

The CAC payback formula divides the sales and marketing (S&M) expense by the adjusted new MRR acquired in the period.

Note that there are numerous other methods to calculate the CAC payback and it is important to understand the pros/cons of each approach, but normally the differences are related to the level of granularity needed (i.e. being as precise as possible vs. rough “back-of-the-envelope” math).

Often, the net new MRR is used, in which the new MRR is adjusted for churned MRR.

For the net new MRR, the inclusion of expansion MRR is a discretionary decision, as those are not necessarily new customers, per se.

How to Interpret CAC Payback (“Months to Recover CAC”)

As a general rule of thumb, most viable SaaS startups have a payback period of fewer than 12 months.

However, the CAC payback period must be evaluated in conjunction with more data points regarding customer types, revenue concentration, billing cycles, working capital spending needs and other factors in order to determine a company’s viability and whether its payback period can be considered “good” or not.

Suppose that a SaaS startup spent $5,600 in total on sales and marketing in its most recent month (Month 1).

The result? A total of 10 new customers – i.e. paying subscribers – were acquired by the sales and marketing team that same month.

The customer acquisition cost (CAC) is $560 per customer, which we calculate by dividing the total S&M expense by the total number of new customers acquired during that period.

The next step is to now calculate the average net MRR using the assumption that the new MRR for April was $500.

Since there were ten new customers, the average new MRR is $50 per customer.

The only remaining assumption is the gross margin on the MRR, which we’ll assume to be 80%.

We now have all the required inputs and can calculate the company’s CAC payback period as 14 months using the equation shown below. 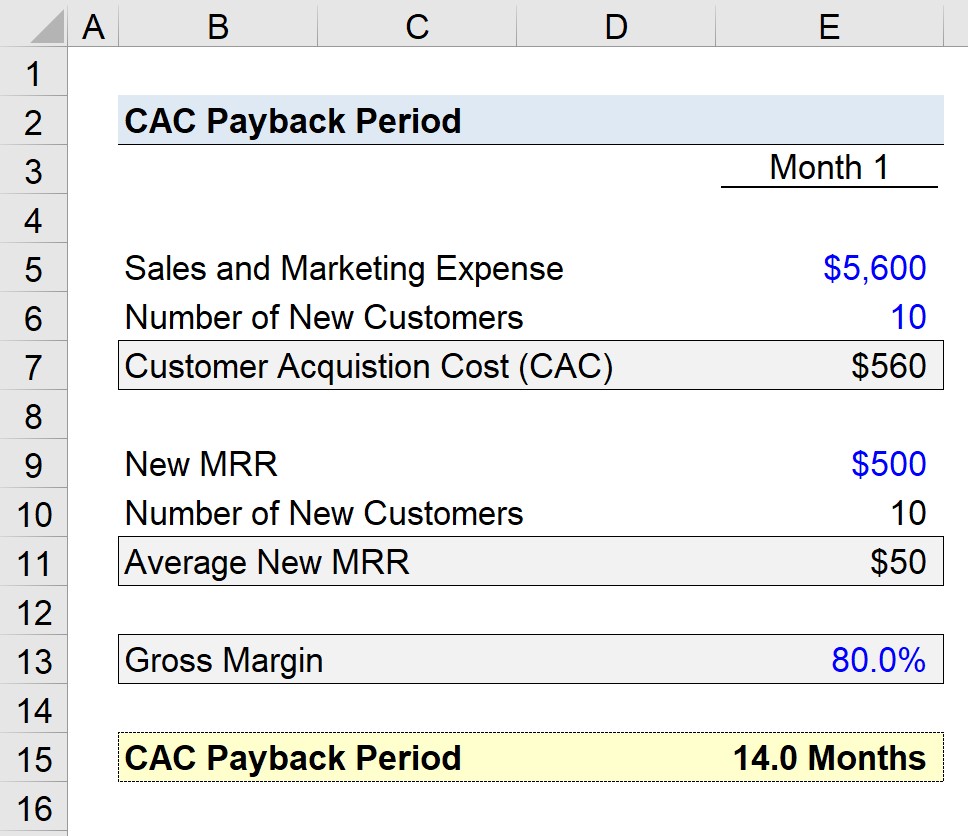