What is Acid Test Ratio?

The Acid Test Ratio, or the “quick ratio“, is used to determine if the value of a company’s short-term assets is enough to cover its short-term liabilities.

Compared to the current ratio, the acid test ratio is a stricter liquidity measure due to excluding inventory from the calculation of current assets.

Liquidity is among one of the most important aspects of a company and its long-term viability.

The acid-test ratio and current ratio are two frequently used metrics to measure near-term liquidity risk, or a company’s ability to quickly pay off liabilities coming due in the next twelve months.

The steps to calculate the two metrics are similar, although the noteworthy difference is that illiquid current assets — e.g. inventory — are excluded in the acid-test ratio.

The formula for calculating the acid test (i.e. the quick ratio) and the current ratio for comparison is as follows.

As one would reasonably expect, the value of the acid-test ratio will be a lower figure since fewer assets are included in the numerator.

Hence, the acid-test ratio is more conservative in terms of what is classified as a current asset in the formula.

If a company were to suddenly be required to pay off the entirety of its short-term liabilities, inventory is usually more time-consuming to liquidate (i.e. to sell and turn into cash) compared to marketable securities — which is where the acid-test ratio comes in.

For example, let’s say a company has the following balance sheet data:

Then, the required inputs are entered into the two formulas:

The current ratio in our example calculation is 3.0x while the acid-test ratio is 1.5x, which is attributable to the inclusion (or exclusion) of inventory in the respective calculations.

How to Interpret Acid-Test Ratio (High vs. Low)

For both the acid-test ratio and current ratio, the same two general rules apply:

Either liquidity ratio indicates whether a company — post-liquidation of its current assets — is going to have sufficient cash to pay off its near-term liabilities.

Therefore, the higher the ratio, the better the short-term liquidity health of the company.

The “floor” for both the quick ratio and current ratio is 1.0x, but this is the bare minimum, and higher values should be targeted.

In particular, a current ratio below 1.0x would be more concerning than a quick ratio below 1.0x, although either ratio being low could be a sign that liquidity might soon become a concern.

A company with a low current or quick ratio should likely proceed with some degree of caution, and the next step would be to determine how much more capital and how quickly it could be obtained.

The model assumptions we’ll be using for our hypothetical company can be found below.

In Year 1, the current ratio can be calculated by dividing the sum of the liquid assets by the current liabilities.

Next, we apply the acid-test ratio formula in the same time period, which excludes inventory, as mentioned earlier.

From Year 1 to Year 4, the following changes occur across the forecast period:

The current ratio is benefiting from the growth in the inventory balance, which is beneficial for debt lenders requiring capital (i.e. collateral), but the accumulation of inventory usually results from lower revenue due to lower market demand.

Since the target range for the current ratio is between 1.5x to 3.0x, the company appears to be in relatively good health based on its current ratio.

However, the acid-test ratio implies a different story regarding the liquidity of the company, as it is below 1.0x.

In closing, we can see the potentially significant differences that may arise between the two liquidity ratios due to the inclusion or exclusion of inventory in the calculation of current assets. 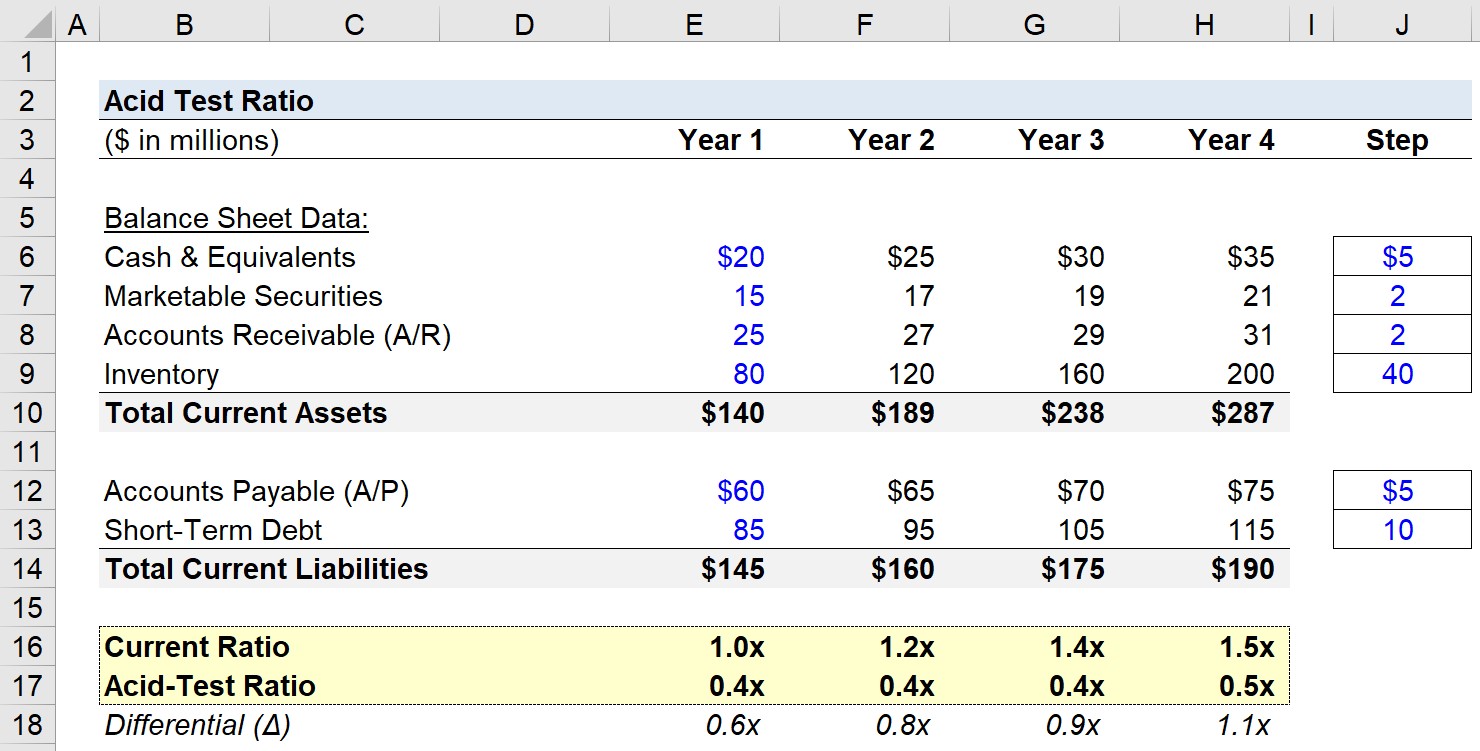 This was so helpful
I’m so grateful