EBIT, often just referred to as operating income, stands for “Earnings Before Interest and Taxes” and measures a company’s operating profitability in a period after COGS and operating expenses are deducted.

How to Calculate EBIT (Step-by-Step)

EBIT, or “operating income”, measures the operating profitability of a company in a specific period, with all core operating costs, i.e. COGS and operating expenses, deducted from revenue.

On the income statement, operating income takes into account the following line items:

Understanding the meaning of revenue (the “top line) should be relatively straightforward because it represents the net sales earned by a company from its operations, i.e. selling products and services to customers.

As for cost of goods sold (COGS) and operating expenses (OpEx), the distinction was mentioned earlier, where the former consists of direct costs while the latter is comprised of indirect costs.

But the matter of importance here is that COGS and operating expenses (OpEx), such as selling, general and administrative (SG&A), research and development (R&D) and sales and marketing (S&M) are incurred as part of the company’s core operations.

In other words, all expenses above the operating income line item are deemed “operating costs” while those below the line such as interest expense and taxes are “non-operating costs”.

Written out, the formula for calculating a company’s operating income (EBIT) is as follows:

A company’s revenue is the starting line item on the income statement, while COGS is the first deduction from the “top line”, resulting in a company’s gross profit.

For example, let’s say that a company in 2021 has the following financials:

The gross profit is equal to $15 million, from which we deduct $5 million in OpEx to calculate operating income.

Continuing off our previous example, we can divide our company’s operating income by its revenue to calculate the operating margin.

Since the operating income is $10 million, we’ll divide that profit metric by our revenue of $25 million.

Since comparisons of standalone operating profit amounts are not meaningful, standardization is required, which is the purpose of multiples.

In our example, the operating margin is 40% — which means that for each dollar of revenue generated, $0.40 is retained and available for non-operating expenses.

The 40% margin can be compared against that of comparable peers, as well as with historical margins to evaluate the financial performance of the company in question.

How to Interpret Operating Income (EBIT)

The previous calculation of the EBIT margin leads to our next point.

Other than EBITDA, EBIT is likely the most commonly used profitability metric for relative valuation and peer comparisons.

Why? EBIT is unaffected by discretionary decisions, such as:

All relative valuation is skewed to some extent, but by using an unlevered metric like EBIT, a significant amount of flaws can be avoided.

It is important to note that one of the primary objectives of relative valuation is to compare the core operations of comparable companies, as opposed to the non-core operations.

For example, let’s say that there are two companies with net margins of 40% and 20%.

However, the operating margins of the two companies could be much closer, as the cause of the 20% differential might be related to capital structure decisions — i.e. the company with 20% net margins might have undergone an LBO, so incurs substantial interest expense each period.

By comparing the operating margin, these non-core differences are intentionally neglected to facilitate more meaningful comparisons among peer groups.

Operating Income vs. EBITDA: What is the Difference?

To reiterate from earlier, EBIT and EBITDA are two of the most frequently used metrics for peer comparisons.

Like EBIT, EBITDA removes the effect of capital structure decisions and taxes — however, depreciation & amortization is added back since they represent non-cash charges (as well as sometimes stock-based compensation).

Both of the profit metrics are informative measures of a company’s profitability and operational performance. Hence, both metrics appear in the majority of comps sheets.

EBITDA is typically a larger amount than operating income because of the non-cash add-backs, with the difference becoming more apparent for capital-intensive industries (i.e. large number of fixed assets + depreciation expenses), which is an area of frequent criticism.

Suppose we’re given the 2021 income statement of a company and tasked with calculating its EBIT.

Starting from the company’s $100 million in revenue, the first step is to deduct COGS, which is stated as $40 million.

The gross profit is equal to $60 million, which we calculated by subtracting COGS from revenue.

Given the $60 million in gross profit, the gross margin comes out to 60%, i.e. for each dollar of revenue generated, $0.60 is kept as gross profit after deducting COGS.

From gross profit, we must now subtract the company’s operating expenses, wherein there are two types recorded.

The total operating expense amounts to $20 million, which we’ll use to reduce gross profit and arrive at an EBIT of $40 million for our hypothetical company.

In closing, we’ll divide our company’s operating income by its revenue in the corresponding period to arrive at an operating margin of 40% to standardize the metric for purposes of comparability. 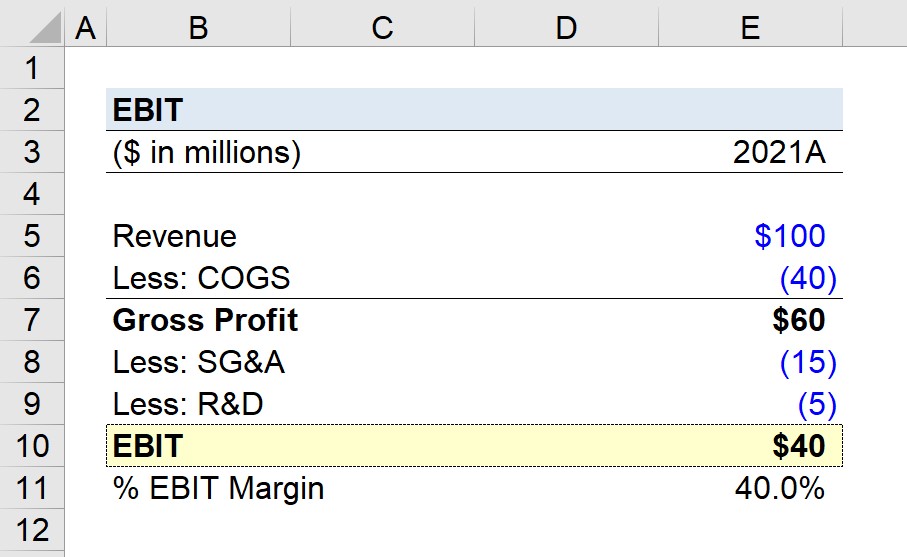