What is the Forward P/E Ratio?

The Forward P/E Ratio is a variation of the price-to-earnings ratio in which a company’s forecasted earnings per share (EPS) is used rather than its historical EPS.

How to Calculate the Forward P/E Ratio

The forward P/E ratio shows the relationship of a company’s price (today) to its forecasted earnings per share (EPS).

The question answered by the forward P/E ratio is:

A forward variation is sometimes used because a company’s future earnings could reflect its real financial performance more accurately, i.e. the company’s future profitability is likely to change substantially in the near term.

Most often, the companies valued using the forward multiples are high-growth companies that have either yet to break even or are barely profitable today.

The implicit assumption is that in the coming year, the company will figure out methods to monetize its customer base better and become more profitable.

The historical earnings are thereby assumed to be more-so “experimental” with regards to identifying their target customer profile and improving their go-to-market strategies for customer acquisition.

These companies can often afford to do so due to having a “cushion” to fall back on, i.e. existing investors (or new investors) to provide them with more capital if needed.

The formula for calculating the forward P/E ratio divides a company’s share price by its estimated earnings per share (EPS).

By contrast, the trailing price-to-earnings ratio (P/E) – the more prevalent P/E ratio – relies on a company’s historical EPS reported in a past period.

The advantage of using the trailing P/E ratio is that the earnings metric is not based on discretionary forward-looking assumptions, as the EPS figure can be confirmed as factual based on historical performance.

Certain unprofitable companies have no other option but to use forward P/E ratios, as a negative EPS would make the ratio meaningless.

However, forward valuation multiples are not used exclusively for unprofitable companies, as often both the trailing and forward P/E ratios are often presented side by side.

One distinct benefit to forward P/E ratios is that the underlying company’s financials are “normalized,” e.g. the effects of non-recurring items are removed.

The limitation to the forward P/E ratio is its reliance on forecasting estimated earnings, causing it to be subject to bias (and perhaps leading to an implied value that deviates from reality).

Since forward P/E ratios are based on the subjective opinions of different equity analysts, the ratios can vary substantially from person to person, as each individual has their own unique perspective on a company’s growth potential.

Suppose a company’s market share price is currently $30.00 as of the latest closing date.

The trailing P/E is not meaningful (i.e. “NM”) because of the negative EPS figure.

The EPS in the one-year forward P/E is no longer negative, but since the company is still barely profitable, the calculated 60.0x P/E ratio is still not too useful.

The two-year forward P/E comes out to 20.0x, which is more practical for performing valuation analysis and for comparisons against industry peers.

The longer the forecast, the more a company’s earnings tend to normalize over time and converge towards the industry average, which is why multiples decline as a company matures.

However, the fact that the two-year forward EPS is from a projection model that was based on discretionary assumptions causes it to be less credible. 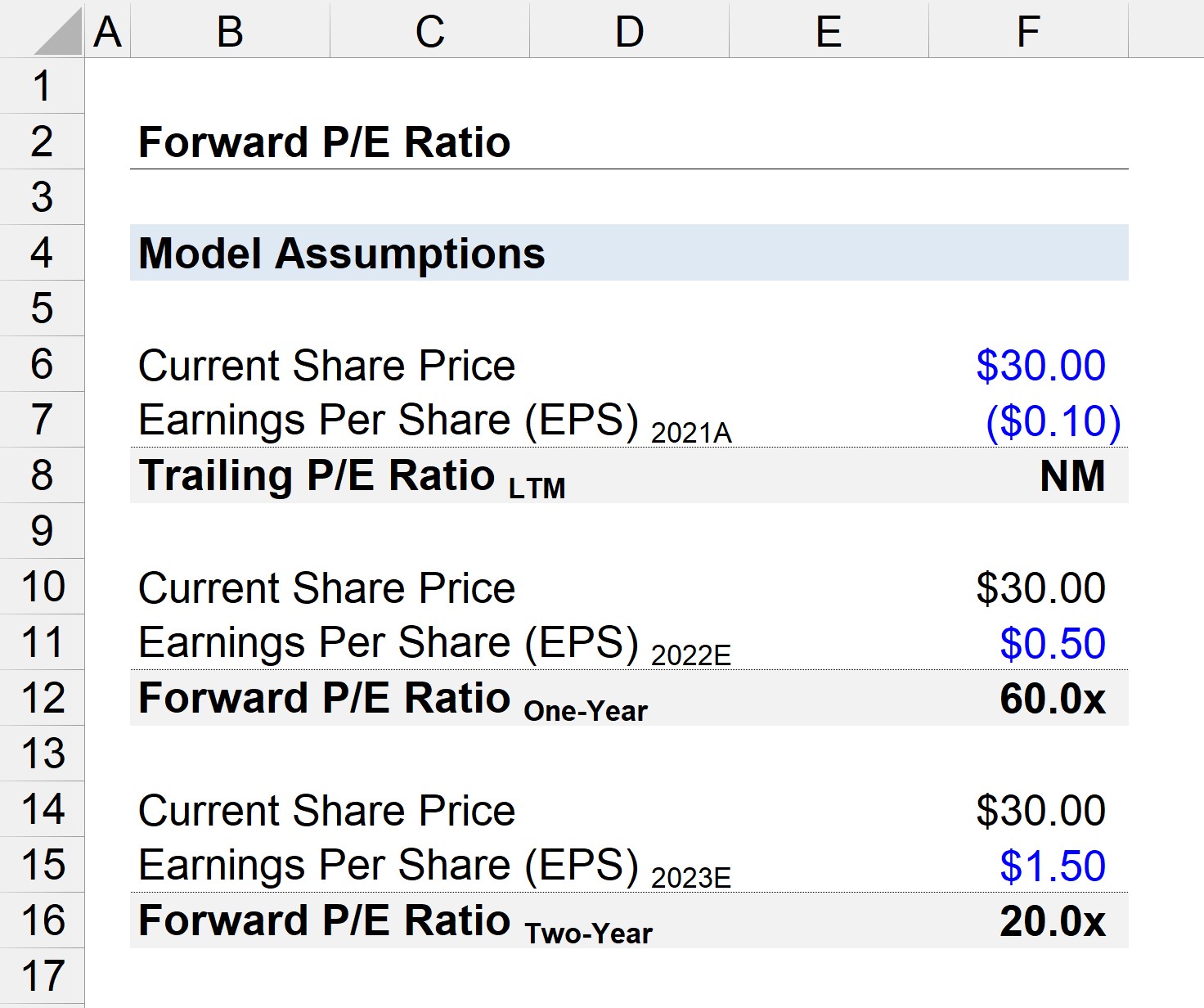