What is the Trailing P/E Ratio?

The Trailing P/E Ratio is calculated by dividing a company’s current share price by its most recent reported earnings per share (EPS), i.e. the latest fiscal year EPS or the last twelve months (LTM) EPS.

The trailing price-to-earnings ratio is based on a company’s historical earnings per share (EPS) as reported in the latest period and is the most common variation of the P/E ratio.

The trailing P/E metric compares a company’s price as of the latest closing date to its most recently reported earnings per share (EPS).

The question answered by the trailing price-to-earnings is:

In general, the historical valuation ratios tend to be most practical for mature companies exhibiting low-single-digit growth.

The main benefit of using a trailing P/E ratio is that unlike the forward P/E ratio – which relies on forward-looking earnings estimates – the trailing variation is based on historical reported data from the company.

Trailing P/E ratios are based on the reported financial statements of a company (“backward-looking”), not the subjective opinions of the market, which is prone to bias (“forward-looking”).

But sometimes, a forward P/E ratio can be more practical if a company’s future earnings reflect its true financial performance more accurately. For instance, a high-growth company’s profitability could change significantly in the upcoming periods, despite perhaps showing low-profit margins in current periods.

Unprofitable companies are unable to use the trailing P/E ratio because a negative ratio causes it to be meaningless. In such cases, the only option would be to use a forward multiple.

One drawback to trailing P/E ratios is that the financials of a company can be skewed by non-recurring items. In contrast, a forward P/E ratio would be adjusted to portray the normalized operating performance of the company.

The most recent earnings report for the company was for its fiscal year 2021 performance, in which it announced earnings per share (EPS) of $3.25.

Using those two assumptions, the trailing P/E ratio can be calculated by dividing the current share price by the historical EPS.

The company’s P/E on a trailing basis is 15.4x, so investors are willing to pay $15.40 for a dollar of the company’s current earnings.

The 15.4x multiple would need to be compared against the company’s industry peers to determine if it is undervalued, fairly valued, or overvalued. 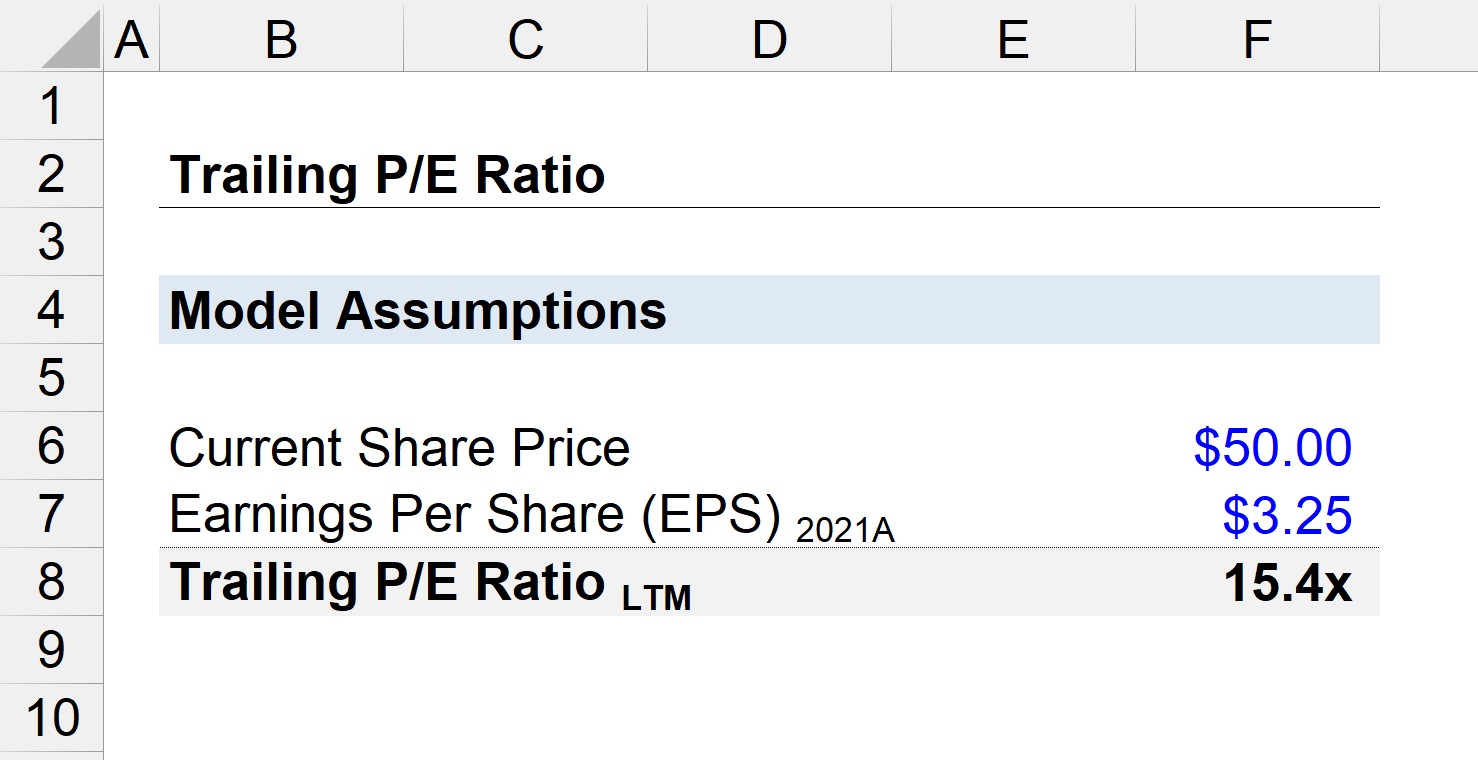