Guide to Understanding the Revenue Multiple

What is the Revenue Multiple?

A Revenue Multiple measures the valuation of an asset, such as a company, relative to the amount of revenue it generates. While revenue-based multiples are seldom used in practice and are perceived as a last resort, unprofitable companies often have no other option.

How to Calculate the Revenue Multiple

A revenue multiple is a form of relative valuation, where an asset’s worth is estimated by comparing it to the market’s pricing of comparable assets.

Usually, multiples with revenue as the denominator are most often used to value companies with negative profit margins that cannot be valued by other traditional valuation multiples (e.g. EV/EBITDA, EV/EBIT).

In general, a revenue-based valuation multiples is rarely used unless there are no other options available (i.e. if the company is unprofitable).

The two most common variations are the following:

Starting off, the EV/Revenue is the ratio between a company’s enterprise value and revenue.

Next, the price-to-sales ratio is the ratio between a company’s market capitalization (“market cap”) and sales.

The distinction between the two multiples is the numerator:

The EV/Revenue calculates the value of the firm’s operations to all stakeholders, such as debt and equity investors. In other words, the calculated valuation is the company’s enterprise value, which represents the total firm value, i.e. the value of a company from the perspective of all of its stakeholders, such as its common equity shareholders, preferred stockholders, and debt lenders.

The price-to-sales ratio, in contrast, calculates the equity value, otherwise known as a company’s market capitalization. Unlike the enterprise value, the market cap is the residual value of a company from the viewpoint of solely common shareholders.

How to Interpret EV/Revenue and Price to Sales

In comparison to earnings multiples, such as EV/EBITDA, revenue-based multiples are less prone to discretionary accounting decisions by management that can skew results.

While earnings multiples are used far more frequently in practice, one major drawback is that decisions such as the useful life assumption on depreciation, inventory recognition policies, and research and development (R&D) spending can all influence the resulting implied valuation.

Revenue multiples can be used for companies that are either unprofitable or have limited profitability, which is their primary use case.

The lack of profitability could be the result of the company being in the early stages of its lifecycle (i.e. startups), or the company may currently be struggling to turn a profit.

On the other hand, revenue-based multiples neglect profitability, which arguably is the most important factor that determines the long-term sustainability of a company.

All companies, at some point, must become profitable for their free cash flows (FCFs) to fund their day-to-day operations and spending requirements. Often, revenue-based multiples can attach a premium to high-growth companies without consideration of their profit margins and cost management.

For early-stage companies exhibiting high growth, an earnings multiple is not feasible if the company is not yet profitable.

In the latter case, the competition in the market causes companies to prioritize growth and increased scale over profitability.

While not optimal, a company’s negative earnings limit the ability to use traditional valuation multiples, forcing reliance on other options.

Suppose a company’s shares are currently priced at $10.00 each, with 5 million shares in circulation on a diluted basis.

Given those two assumptions, the company’s market capitalization is $50 million.

The fact that the company’s net debt is half of its total revenue suggests operations are funded via external financing, i.e. debt, rather than its own cash flows.

After adding the company’s net debt to its market capitalization, i.e. equity value, the enterprise value (TEV) comes out to be $60 million.

We calculate the EV/Revenue and price-to-sales ratios as the following: 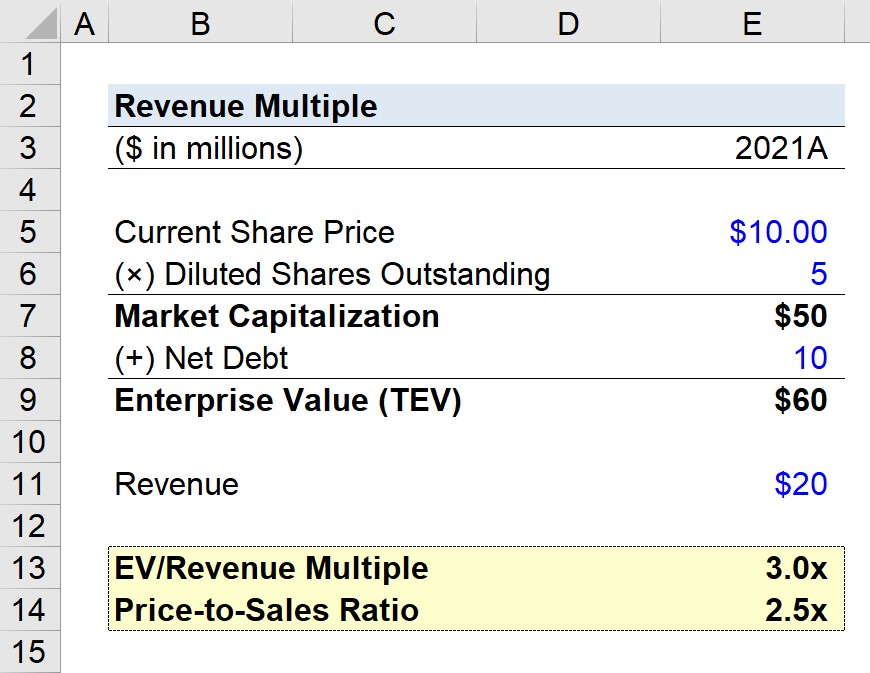