Guide to Understanding the EV/EBIT Multiple

The EV/EBIT Multiple is the ratio between enterprise value (EV) and earnings before interest and taxes (EBIT).

Considered one of the most frequently used multiples for comparisons among companies, the EV/EBIT multiple relies on operating income as the core driver of valuation.

How to Calculate EV/EBIT Multiple (Step-by-Step)

Calculating the EV/EBIT multiple, or “enterprise value to EBIT”, comprises dividing the total value of the firm’s operations (i.e. enterprise value) by the company’s earnings before interest and taxes (EBIT).

The formula for calculating the EV/EBIT multiple is as follows.

As for all valuation multiples, the general guideline is that the value driver (the denominator) must be consistent with the valuation measure (numerator) in terms of the providers of capital represented.

The EV-to-EBIT multiple abides by this rule because operating income (EBIT), like enterprise value, is considered a metric independent of capital structure (i.e., is applicable to all shareholders, both debt and equity holders).

Like all multiples, comparisons should only be done between similar companies in the same (or adjacent) sectors, as each industry has its own standards for what the average multiple would be.

EV/EBIT vs. EV/EBITDA Multiple: What is the Difference?

Similar to the EV/EBITDA multiple, EV/EBIT is independent of the capital structure of the company, whereas multiples like the P/E ratio are impacted by financing decisions.

Since both multiples are unaffected by differences in capital structure, the two are arguably the most commonly relied-upon multiples in relative valuation.

Further, the two multiples each factor in the operating efficiency of a company (i.e., the ability to convert revenue into operating profits).

However, one noteworthy distinction is that EV/EBIT accounts for depreciation and amortization (D&A).

If the difference in the D&A expense is marginal within the comps set, as in the case of low capital-intensity industries (e.g. service-oriented industries like consulting), then both will be relatively close to one another.

But in contrast, given significant differences in D&A within capital-intensive industries (e.g. manufacturing, industrials), the fact that EV/EBIT recognizes D&A may make it a more accurate measure of value.

The recognition of D&A is associated with matching the cash outflows with the utilization of the assets across their useful life. While D&A is a non-cash expense and thereby added back on the cash flow statement, D&A results from capital expenditures, which can be a significant (and regular) outflow for certain companies.

In our hypothetical scenario, we’ll be comparing three different companies.

Upon putting these two data points together, we get an EV/LTM EBITDA of 10.0x for all three companies.

But recall from earlier, the EV/EBITDA multiple can neglect differences in capital intensity, which is the differentiating factor between the companies under comparison.

Each company has a different amount of D&A expense, with the expense being lower for the first two companies, given the reduced capital intensity.

Clearly, the third company is an outlier due to its substantially greater D&A expense. 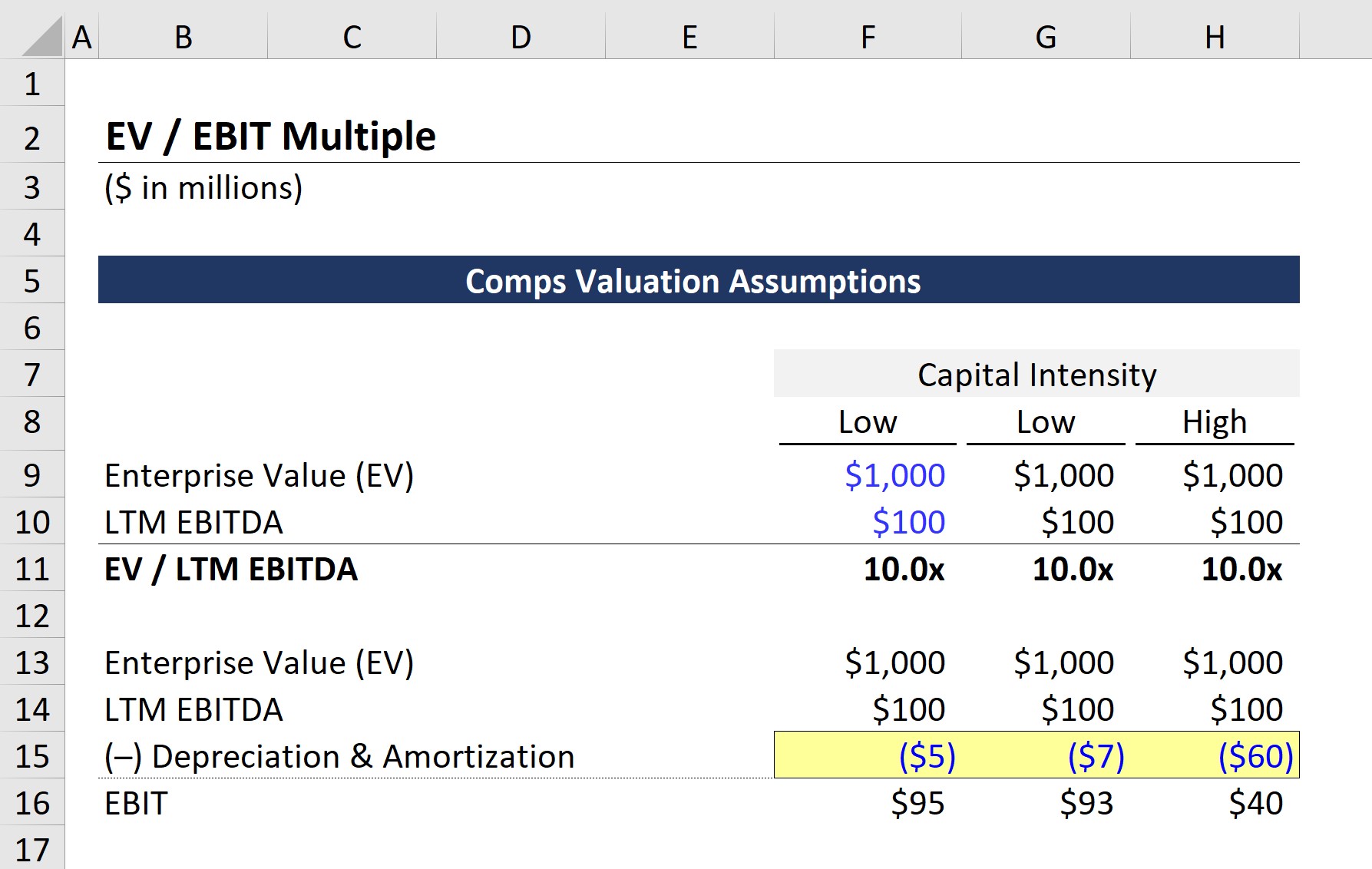 Next, the EV/EBIT multiple can be calculated by dividing the enterprise value (EV) by the EBIT, which we’ll complete for each company in order from left to right.

Note how the multiples are not too different for the first two companies, as those two companies are less capital intensive.

When it comes to valuing companies comprised of low capital intensity, the EV/EBIT multiple is still a useful tool, but it tends to come out in the same ballpark as the EV/EBITDA multiple. 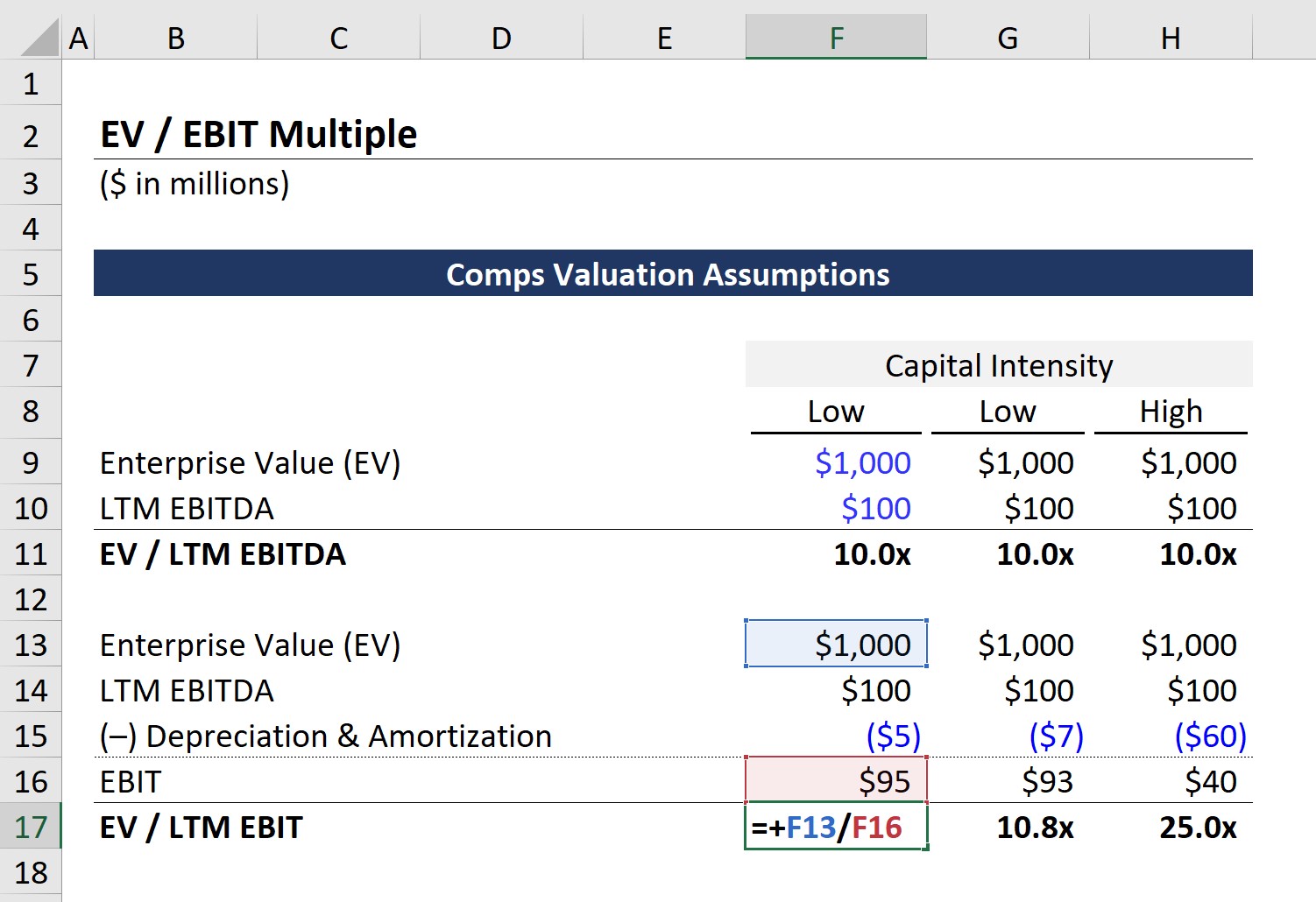 Based on the range provided, the company characterized by high capital intensity (and incurs more D&A) is an outlier, and is less useful as a point of comparison versus the other two.

Equity analysts and investors often use the EV/EBITDA multiple, which excludes the impact of D&A.

But while the EV/EBITDA multiple can come in useful when comparing capital-intensive companies with varying depreciation policies (i.e., discretionary useful life assumptions), the EV/EBIT multiple does indeed account for and recognize the D&A expense and can arguably be a more accurate measure of valuation. 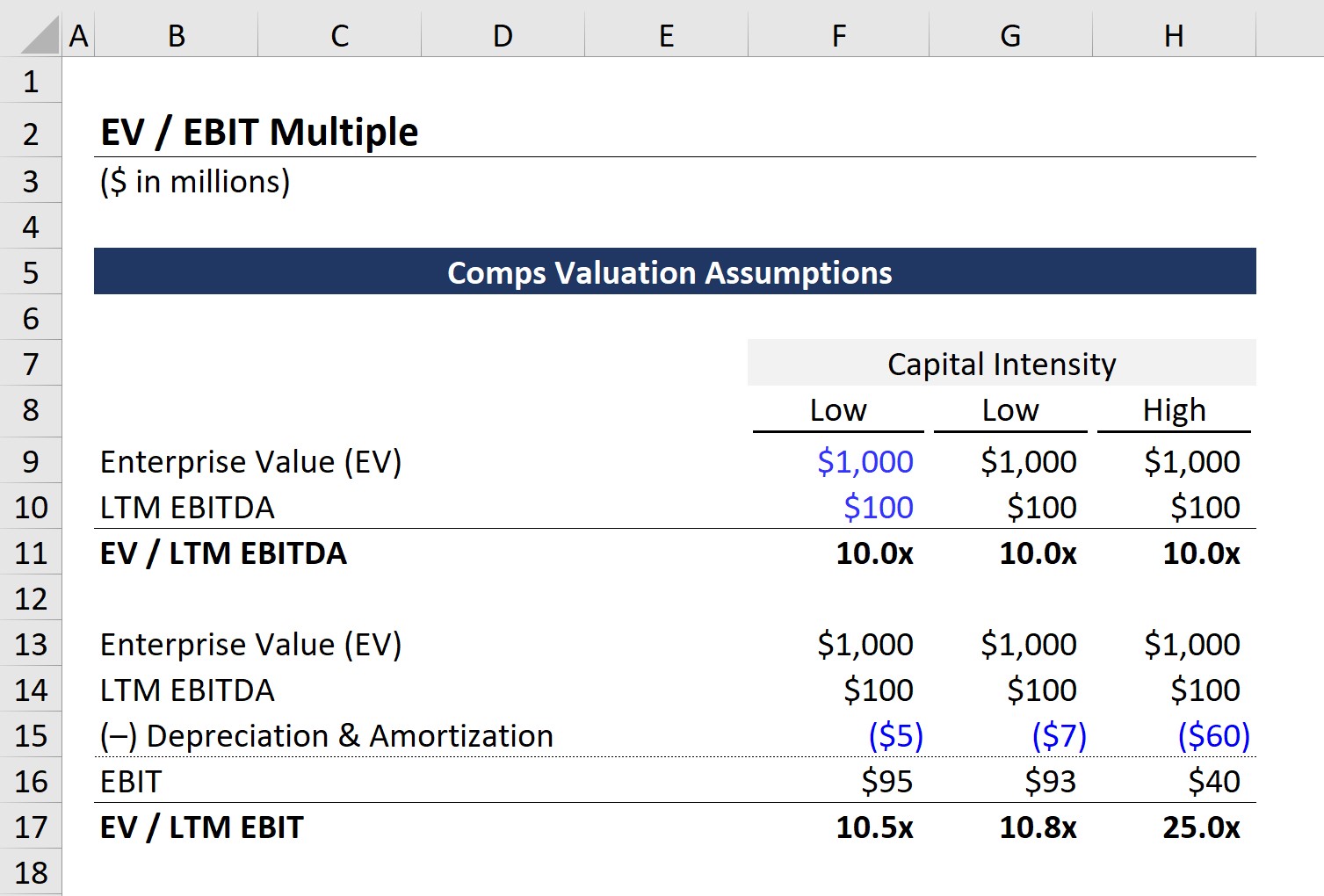