What is the EV / Revenue Multiple?

The EV / Revenue Multiple is a ratio that compares the total valuation of a firm’s operations (enterprise value) to the amount of sales generated in a specified period (revenue). Generally, the EV / Revenue multiple is most commonly used to derive valuations for companies characterized by negative or limited profitability.

To briefly review, valuation multiples are measures of a particular financial metric as a ratio of another, with the intention of serving as a basis of comparison between different companies.

The EV / Revenue multiple is most applicable for early-stage companies with high growth. Oftentimes, these types of companies are either unprofitable or have limited profitability, which inhibits the use of certain multiples like the EV / EBITDA multiple.

For the EV / EBITDA, EV / EBIT, and other related multiples to be effective valuation tools, the companies in the comps set must be near or in the mature stages of their life cycles with relatively stable operations and positive earnings.

Otherwise, the median or mean calculated from the peer group of companies under comparison will not be meaningful, or provide minimal insight into how the market values specific qualities of companies in the relevant industry.

A valuation multiple will consist of a metric depicting value (i.e. price) in the numerator, with a metric tracking operating performance in the denominator.

In the case of the enterprise value-to-revenue multiple, the two components are as follows:

To reiterate from earlier, the EV / Revenue multiple is typically used for companies unprofitable not only at the net income level (the “bottom line”), but also at the operating income (EBIT) and EBITDA line.

Since more time is required for the companies to normalize and develop to a more sustainable level that is more practical in terms of comparability, the EV / Revenue could be extended for several projected years (e.g. NFY + 1, so two-years forward) if the circumstances are appropriate.

For a significant percentage of early-stage SaaS companies, venture investors can be forced to use the EV / Revenue multiple to value potential investments.

Given the absence of profits and a subscription-based business model that makes near term profitability under accrual accounting a poor indicator of a company’s future prospects, it should not come as a surprise that the EV / Revenue multiple is heavily relied upon for these types of high growth companies.

But the EV / Revenue multiple is ordinarily a “last resort” valuation option rather than a preferential choice.

A higher EV / Revenue multiple relative to competitors implies the market believes that the company can generate revenue more efficiently into the future (and are willing to pay a premium for each dollar of sales).

A lower EV / Revenue multiple can theoretically be a signal that a company is potentially undervalued and a worthwhile investment to pursue.

But one significant limitation of the EV / Revenue is that paying for growth is a subjective decision and just because a company’s multiple is high, it does NOT necessarily indicate the company is overvalued (e.g. Tesla, Amazon).

Here, investors are pricing in the potential (and positive outlook) for the company monetizing its customer base better, which can be a risky yet often profitable bet.

While growth in sales is one of the most influential factors in corporate valuation, others considerations like profitability and free cash flows (FCFs) gain more importance over time, especially as companies mature.

Now, we’re ready to move on to an example calculation of the EV / Revenue multiple. Just fill out the form below to receive access to the file that goes along with the tutorial.

In our example scenario, the company we’ll be looking at has an enterprise value (EV) of $500mm, which will grow by $10mm in the subsequent periods.

Since we have projected our numerator, the enterprise value, we can move onto the denominator(s).

As of the last twelve months, the following operating assumptions are used:

For each period of the forecast, the revenue, EBIT, and EBITDA grow by a step function of $50mm (i.e. increase each year by said amount).

Now, all that remains is dividing the enterprise value (EV) by the applicable financial metric to calculate the three valuation multiples.

For instance, to calculate the EV / Revenue multiple, we divide the enterprise value by the revenue generated in the relevant period. 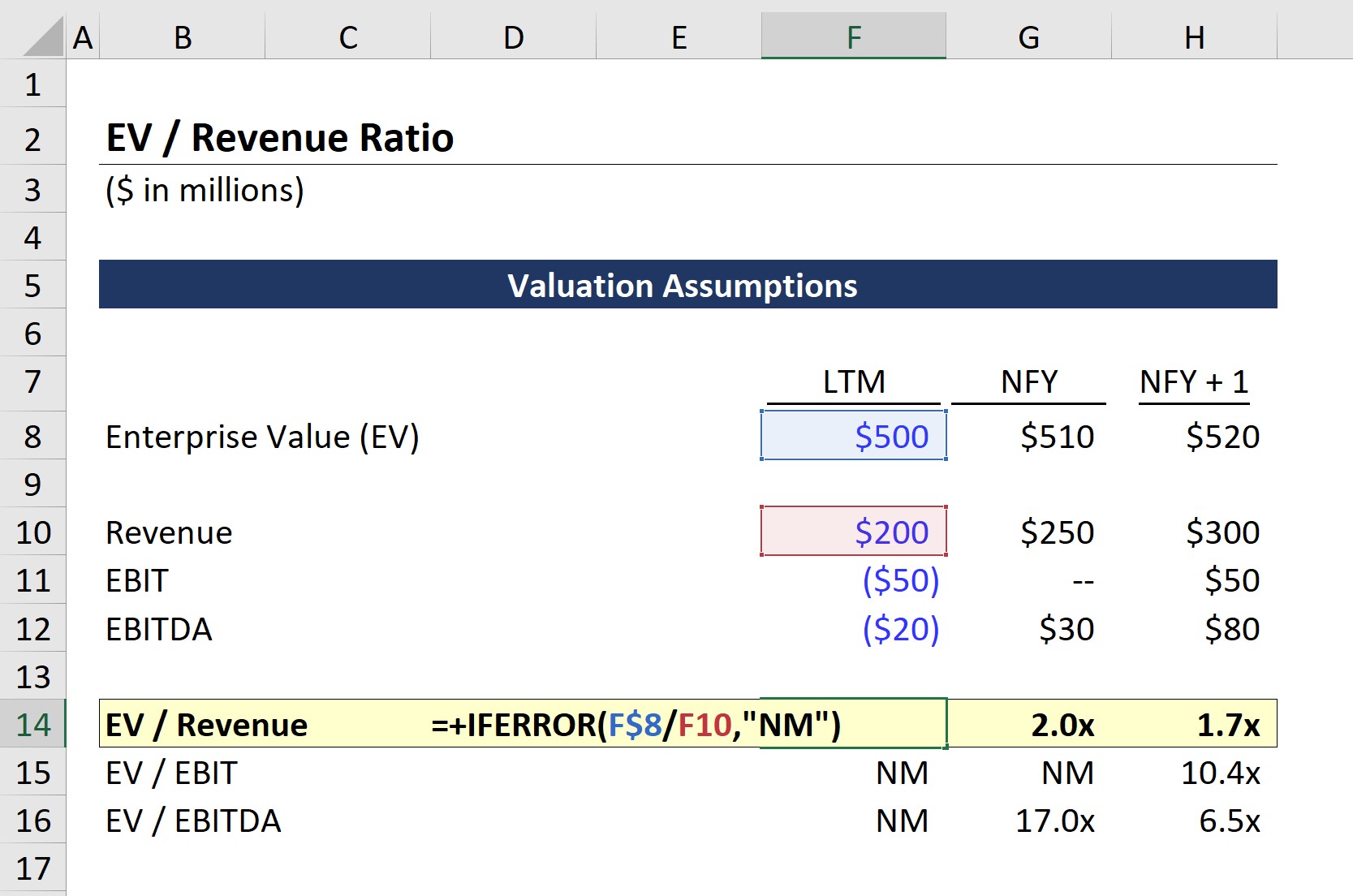 From the completed output sheet posted below, we can observe how the EV / Revenue remains within a narrow range in all three periods.

In contrast, the EV / EBIT and EV / EBITDA multiples are not meaningful (NM) for the earlier periods due to the company being unprofitable.

But once the company gradually begins to turn profitable, the reliance on the EV / Revenue multiple would likely decline, as the current profitability (and potential for margin expansion) start to drive the valuation increasingly more. 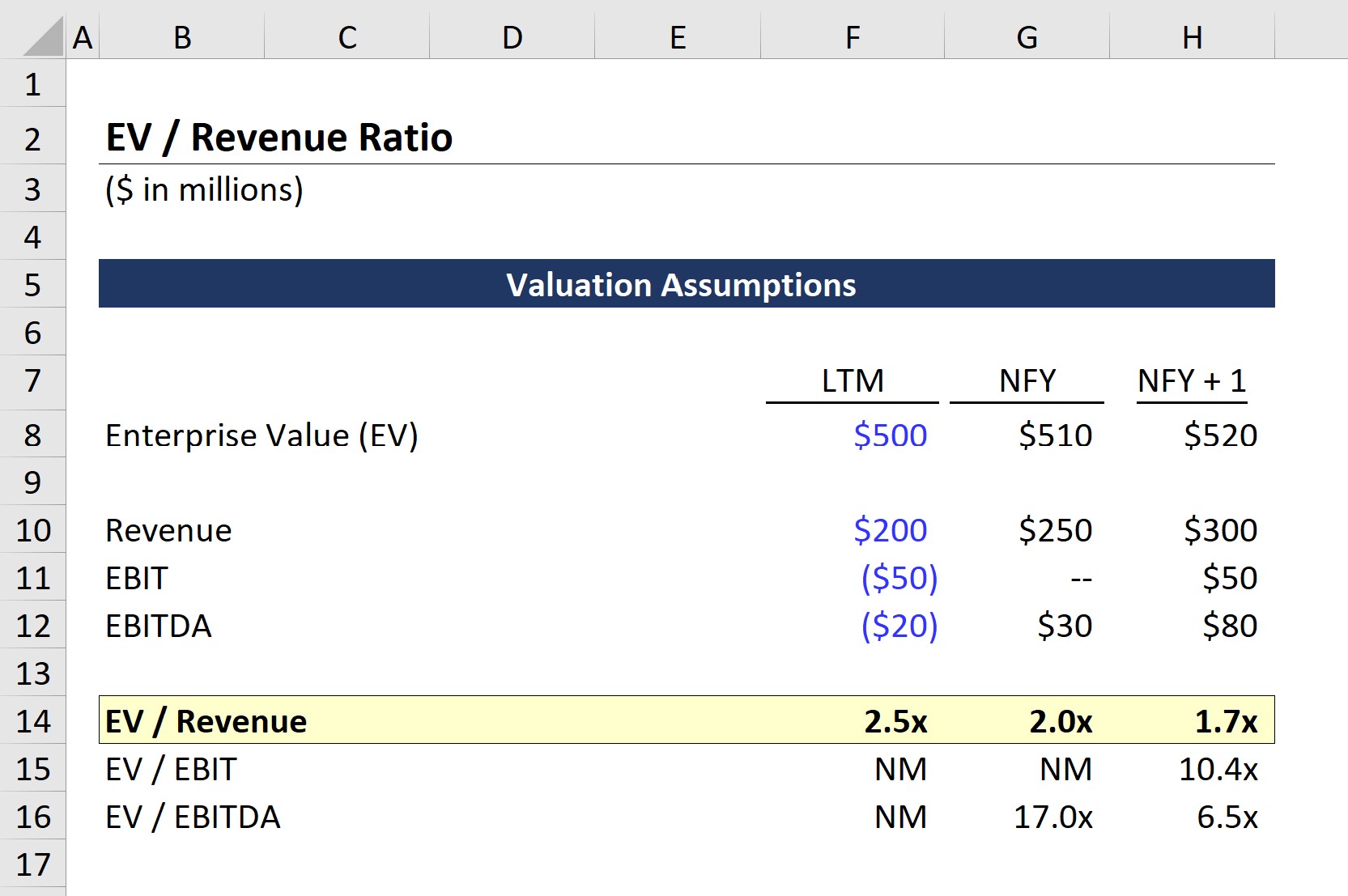 To conclude, the EV / Revenue – despite its numerous drawbacks – can nevertheless be a practical measure of value and facilitate comparisons among high growth, unprofitable companies.

Similar to most variations of multiples analysis, beyond just calculating the multiple itself, you should also appraise a target company’s strategic positioning within a sector and gain insights into the industry-specific factors that cause higher (or lower) valuations.