What is the PEG Ratio?

The Price/Earnings-to-Growth (PEG) Ratio is a valuation metric that standardizes the P/E ratio against a company’s expected growth rate.

Unlike the traditional price-to-earnings ratio (P/E), which tends to be used more frequently among investors, the PEG ratio accounts for the future growth of the company.

The PEG ratio addresses one of the primary weaknesses of the price-to-earnings (P/E) ratio, which is the lack of consideration for future growth.

Because the P/E ratio is adjusted for the expected earnings growth rate, the PEG ratio can be viewed as a more accurate indicator of a company’s true value.

In effect, investors can use the PEG ratio to make more well-informed decisions on whether the market valuation of a stock is currently undervalued or overvalued.

But similar to the P/E ratio, there are two notable pitfalls to the PEG ratio:

For the reasons mentioned above, the PEG ratio is most appropriate for mature, low to mid-level growth companies, and near meaningless for those with negative earnings or negative projected growth.

Additionally, the PEG ratio uses an accounting measure of profit, net income. Often, accounting profits can be misleading at times due to the:

Overall, accounting measures of profits are prone to discretionary management decisions, which creates room for the “manipulation” of profits to paint a misleading depiction of the company’s profitability.

The formula for the PEG ratio consists of calculating the P/E ratio and then dividing it by the long-term expected EPS growth rate for the next couple of years.

It is essential to use a long-term growth rate that is considered sustainable.

While historical growth rates could be used (or at least referenced), intuitively it would not make much sense as investors value companies based on future growth, NOT historical growth – albeit the two are closely related.

Besides being an internal measure, the PEG ratio can be compared to a company’s industry peer group, Unlike a standard P/E ratio, the PEG ratio allows for comparisons across a broader range of company types, and notably between companies with differing growth rates.

However, this does not mean that a company with an EPS growing at 2% can necessarily be compared to a company with EPS growth forecasted at growing 50% year-over-year.

Instead, the differences in growth rates should be relatively reasonable – or said differently, companies should be at similar stages in their lifecycles to warrant a meaningful comparison.

To summarize, when it comes to comparisons of the PEG ratio among companies:

For instance, if a company’s latest closing share price is $5.00 and its diluted EPS in the last twelve months (LTM) is $2.00, we can compute the P/E ratio as follows:

Assuming the company’s expected EPS growth rate is 2.0%, the PEG ratio can be calculated as:

Based on our calculated PEG ratio of 1.5x, the company would be deemed overvalued since it exceeds 1.0x.

Now that we’ve covered the PEG concept and formula, we can move to an example calculation of the PEG ratio with different scenarios. To download the Excel file, fill out the linked form below.

Let’s get started – below are the assumptions we’ll be using for all three cases for Companies A, B, and C:

With that said, the P/E ratio can be calculated by just dividing the share price by the EPS.

As of the present day, the market is willing to pay $10 for one dollar of these companies’ earnings.

The remaining step is to divide the P/E ratio by the EPS growth rate (g), which is where the differences amongst each of the companies lie.

The calculation of the PEG ratio in Excel has been shown below. 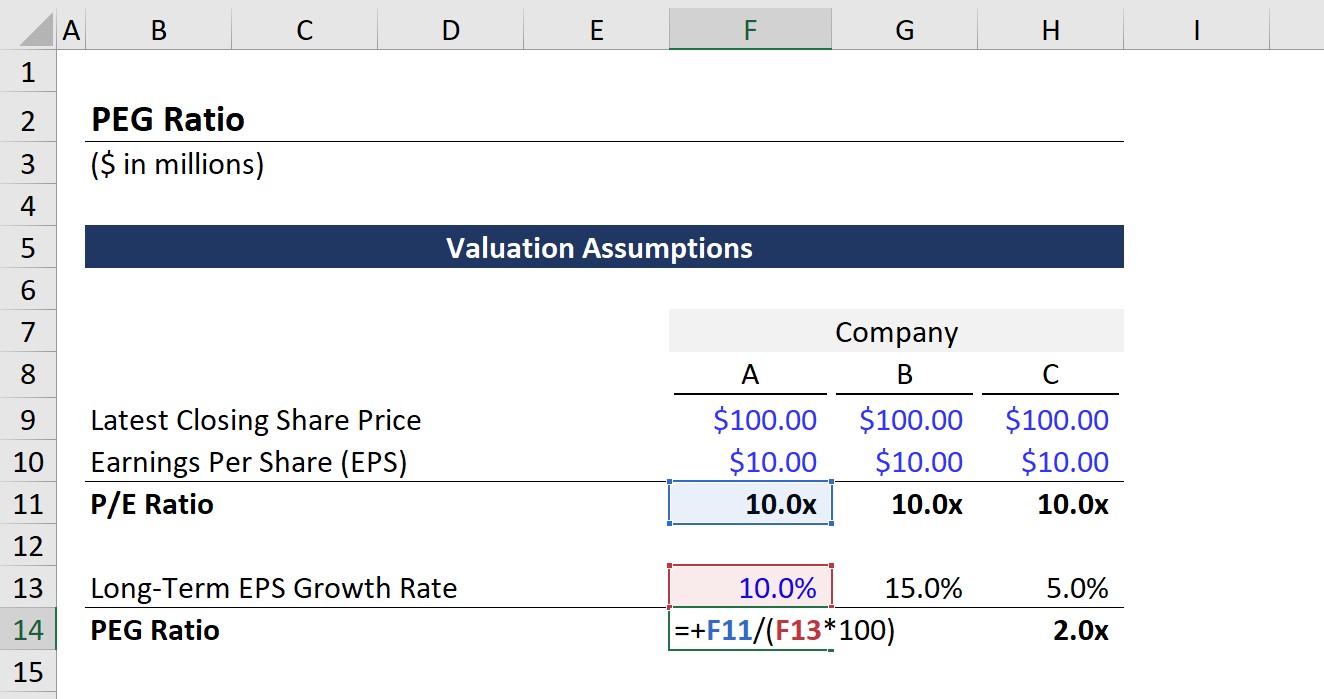 Once the process is done for each scenario (Company A, B, and C), we get the following PEG ratios:

While there are further complexities that must be taken into consideration, from our exercise, we’d interpret these findings are:

If we were to rely solely on the P/E ratio, each company would have a P/E ratio of 10.0x.

But upon adjusting for the differences in the expected EPS growth rates, we derive more insights regarding the market values of the three companies.

In conclusion, a screenshot of the finished output sheet can be found below. 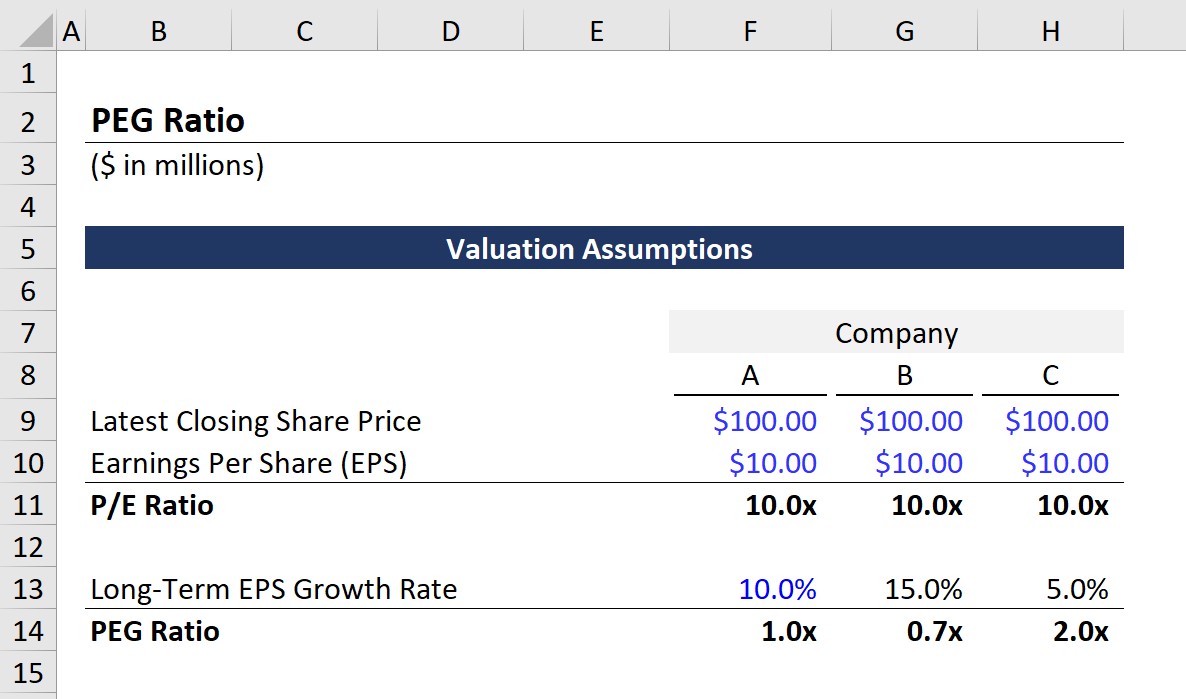