ASC 606 is the revenue recognition standard established by FASB and the IASB that governs how revenue generated by public and private companies is recorded on their financial statements.

The effective date in which compliance with ASC 606 was mandated for public companies was set to start in all fiscal years after mid-December 2017, with an extra year offered to non-public companies. 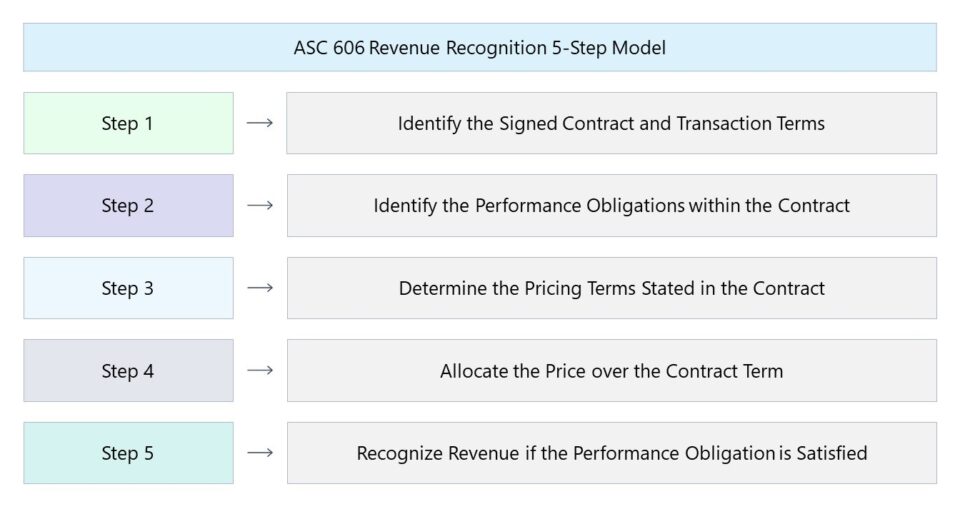 ASC stands for the “Accounting Standards Codification” and is intended to establish the best practices for reporting purposes among companies, both public and private, to ensure consistency and transparency in financial statement filings.

The ASC 606 principle was developed in conjunction between FASB and IASB to further standardize revenue recognition policies.

ASC 606 provides guidance on the recognition of revenue by companies with revenue models oriented around long-term contracts.

The relatively new accounting policy — a highly anticipated adjustment — addresses the topics of performance obligations and licensing agreements, which are two items that are increasingly prevalent in modern business models.

The ASC 606 framework offers step-by-step guidance to companies on the standards for how revenue is recognized, i.e. the treatment of “earned” revenue vs. “unearned” revenue.

The purpose of the updated standard was to eliminate inconsistencies in the methodology by which companies would record their revenue, especially across different industries.

Before the changes were implemented, the limited standardization in financial reporting made it challenging for investors and other consumers of the financial reports filed with the SEC, resulting in comparisons among different companies to sometimes be “apples-to-oranges”.

The effective date in which ASC 606 compliance became required are as follows:

The nature of the transaction, the associated dollar amount, and the terms surrounding the timing of the delivery of the product or service must be considered by the accountant preparing (or auditing) the financials of a company.

Once ASC 606 became the new standard, it achieved the following goals:

In order for revenue to be recognized, a financial arrangement among the parties involved must be evident (i.e. the seller delivering the good/service and the buyer receiving the benefits).

Within the transaction agreement, the specific events that denote the completion of the product or service delivery must be clearly stated, as well as the measurable pricing charged to the buyer (and the seller’s collection of the proceeds post-sale and delivery should be reasonable).

The five-step revenue recognition framework set by ASB 606 is as follows.

Once the four steps are met, the final step is for the seller (i.e. the company obligated to deliver the good or service to the customer) to record the revenue earned, since the performance obligation was satisfied.

In effect, ASC 606 provided a more robust structure for revenue accounting for public and non-public companies, which, most importantly, became standardized across all industries.

The most common methods of revenue recognition are the following:

While the transition phase might have been inconvenient for certain companies, the objective of the new compliance standards is to make the process of revenue recognition simpler (and thus, easier for end users to interpret and understand the financial statements of companies).

The impact of ASC 606 was certainly not uniform across all industries. For example, clothing retailers most likely saw minimal disruption or inconvenience from the switch. The retail business model is characterized by purchases of products and the recognition of revenue post-delivery at a single point in time, whether the customer paid using cash or on credit.

However, companies with business models with recurring sales such as those operating in the software-as-a-service (SaaS) industry with subscriptions and licenses most likely had a vastly different experience in terms of the adjustment period.

In accordance with the revenue recognition principle, revenue is expected to be recognized in the period in which the good or service was actually delivered (i.e. “earned”), so the delivery is the determinant of when revenue is recorded on the income statement.

Suppose a B2B SaaS business offers its clients the option to pick a specific type of pricing plan, such as quarterly, annual, or multi-year payment plans.

Notably, upfront payments are accepted for services not anticipated to be received by the customer for more than twelve months. But whichever plan the customer picks, the service is delivered on a monthly basis.

Each specific contractual obligation contained within the customer contract (and the corresponding pricing and performance obligation) determines the timing of the revenue recognition.

If we assume one corporate client signed a contract with an average order value (AOV) of $6 million upfront for four years of services, the company cannot record the entire one-time customer payment in the current period.

Instead, the revenue can only be recognized after each month over the four-year term, or 48 months.

By dividing the AOV by the total number of months, the “earned” revenue each month is $125,000.

If we multiply the monthly revenue by the number of months in a year, 12 months, the annual recognized revenue is $1,500,000.

In the final step, we can multiply the annual revenue by four years to arrive at our AOV of $6 million, confirming our calculations so far are correct.

Our example in the prior section introduces the concept of deferred revenue, which describes the event wherein the company collects cash payment from a customer before the actual delivery of the good or service.

In other words, the performance obligation of the company has not yet been met. The cash payment collected from the customer was received in advance because the company is obligated to provide a specified benefit to the customer on a future date.

With that said, the deferred revenue, often referred to as “unearned revenue”, is recorded in the liabilities section of the balance sheet, as the cash was received and all that remains is for the company to fulfill its responsibilities as part of the signed agreement.

Until the unmet obligation of the company is fulfilled, the cash received from the customer cannot be recorded as revenue.

The prepayment is captured by the deferred revenue line item on the balance sheet and will remain there until the company “earns” the revenue. The period in which the good or service was delivered determines the timing of when the revenue is formally recognized as well as the associated costs per the matching principle.