Guide to Understanding the Depreciation Expense

Depreciation is an expense that reduces the value of a fixed asset (PP&E) based on a useful life and salvage value assumption.

On the income statement, depreciation is recorded as a non-cash expense that is treated as a non-cash add back on the cash flow statement. On the balance sheet, the depreciation expense reduces the book value of a company’s property, plant and equipment (PP&E) over its estimated useful life.

How to Calculate Depreciation (Step-by-Step)

Depreciation is required under U.S. GAAP accrual accounting due to the matching principle, which attempts to recognize expenses in the same period as when the coinciding revenue was generated.

In theory, this is a more accurate representation of the operational performance of the company, since the capital expenditure required to purchase the fixed asset is recognized across time span wherein it is generating revenue.

The concept of depreciation is an important consideration in order to understand the true cash flow profile of a company since it is a non-cash expense and can often be affected by discretionary assumptions by the company (i.e. determining the useful life).

Is Depreciation an Operating Expense?

The depreciation expense will be embedded within either the cost of goods sold (COGS) or the operating expenses line on the income statement.

As such, the recognition of depreciation on the income statement reduces taxable income, which leads to lower net income (i.e., the “bottom line”).

It is rather uncommon for companies to report depreciation as a separate expense on their income statement. Thus, the cash flow statement (CFS) and footnotes are recommended financial filings to obtain the value of a company’s depreciation expense.

The depreciation expense is scheduled over the number of years corresponding to the useful life of the respective asset.

If a manufacturing company were to purchase $100k of PP&E with a useful life estimation of 5 years, then the depreciation expense would be $20k each year under straight-line depreciation.

Therefore, $100k in PP&E was purchased at the end of the initial period (Year 0) and the value of the purchased PP&E on the balance sheet decreases by $20k each year until it reaches zero by the end of its useful life (Year 5).

Assuming the company pays for the PP&E in all cash, that $100k in cash is now out the door, no matter what, but the income statement will state otherwise to abide by accrual accounting standards. This “smooths out” the company’s income statement so that rather than showing the $100k expense entirely this year, that outflow is effectively being spread out over 5 years as depreciation.

There are various depreciation methodologies, but the most common type is called “straight-line” depreciation.

At the end of the day, the cumulative depreciation amount is exactly the same, as is the timing of the actual cash outflow, but the difference lies in the net income and EPS impact for reporting purposes.

Under the accelerated depreciation method, net income and EPS would be lower in the earlier periods and then be higher relative to straight-line depreciation in later years – however, companies tend to prioritize near-term earnings performance.

The assumption behind accelerated depreciation is that the asset drops more of its value in the earlier stages of its lifecycle, allowing for more deductions earlier on.

The accelerated approach eventually begins to show less depreciation on the income statement further into the asset’s useful life, but to reiterate, companies still prefer straight-line depreciation because of the timing (i.e., avoid missing EPS figures on earnings releases).

To ensure you understand the non-cash feature of depreciation, we will go through this classic accounting interview question:

Q. “How would a $10 increase in depreciation impact the three financial statements?”

The key takeaway is that depreciation, despite being a non-cash expense, reduces taxable income and has a positive impact on the ending cash balance.

The “quick and dirty” method for projecting capital expenditures (Capex) and depreciation is as follows:

Capital expenditures are directly tied to “top line” revenue growth – and depreciation is the reduction of the PP&E purchase value (i.e., expensing of Capex).

Capex can be forecasted as a percentage of revenue using historical data as a reference point. In addition to following historical trends, management guidance and industry averages should also be referenced as a guide for forecasting Capex.

For mature businesses experiencing low, stagnating or declining growth, the depreciation/Capex ratio converges near 100%, as the majority of total Capex is related to maintenance CapEx.

How to Build Depreciation Waterfall Schedule

Another method to project a company’s depreciation expense is to build out a PP&E schedule based on the company’s existing PP&E and incremental PP&E purchases.

Under this approach, the average remaining useful life for existing PP&E and useful life assumptions by management (or a rough approximation) is necessary for projecting new CapEx.

For a complete depreciation waterfall schedule to be put together, more data from the company would be required to track the PP&E currently in use and the remaining useful life of each. Additionally, management plans for future CapEx spending and the approximate useful life assumptions for each new purchase are necessary.

If the data is readily accessible (e.g., a portfolio company of a private equity firm), then this granular approach would actually be feasible, as well as be more informative than the simple percentage-based projection approach.

But in the absence of such data, the number of assumptions required based on approximations rather than internal company information makes the method ultimately be less credible.

Now, we will go through a depreciation waterfall schedule forecast build. Fill out the form below to download the template that goes along with our step-by-step tutorial:

In our hypothetical scenario, the company is projected to have $10mm in revenue in the first year of the forecast, 2021. The revenue growth rate will decrease by 1.0% each year until reaching 3.0% in 2025.

CapEx as a percentage of revenue is 3.0% in 2021 and will subsequently decrease by 0.1% each year as the company continues to mature and growth decreases.

Note that for purposes of simplicity, we are only projecting the incremental new capex.

In a full depreciation schedule, the depreciation for old PP&E and new PP&E would need to be separated out and added together.

For the depreciation schedule, we will use the “OFFSET” function in Excel to grab the CapEx figures for each year.

While not overly useful for our simplistic model, it can help conserve time in more complex builds at the per-asset level. Regarding the inputs for the formula:

In the first year, the PP&E balance in 2021 comes from the $300k corresponding CapEx spend. Here, we are assuming the CapEx outflow is right at the beginning of the period (BOP) – and thus, the 2021 depreciation is $300k in CapEx divided by the 5-year useful life assumption. This comes out to $60k each year, which will remain constant until the salvage value reaches zero.

The formula for the annual depreciation is as follows.

The completed forecast for Year 1 has been highlighted in the screenshot below. As a sanity check, each of the numbers should be the same since we are using the straight-line approach in our example. And while not applicable for our projection, longer-term models should use a “MAX” function with the remaining salvage value to make sure it does not dip below zero.

Then, we can extend this formula and methodology for the remainder of the forecast. For 2022, the new CapEx is $307k, which after dividing by 5 years, comes out to be about $61k in annual depreciation.

Returning to the “PP&E, net” line item, the formula is the prior year’s PP&E balance, less capex, and less depreciation.

Since Capex was input as a negative, the CapEx will increase the PP&E amount as intended (otherwise, the formula would have added Capex if the positive sign convention had been used).

In closing, the net PP&E balance for each period is shown below in the finished model output.

While the purpose of this post was primarily to illustrate how depreciation can be forecasted, PP&E, Capex, and depreciation are three intertwined metrics that ultimately go hand-in-hand. 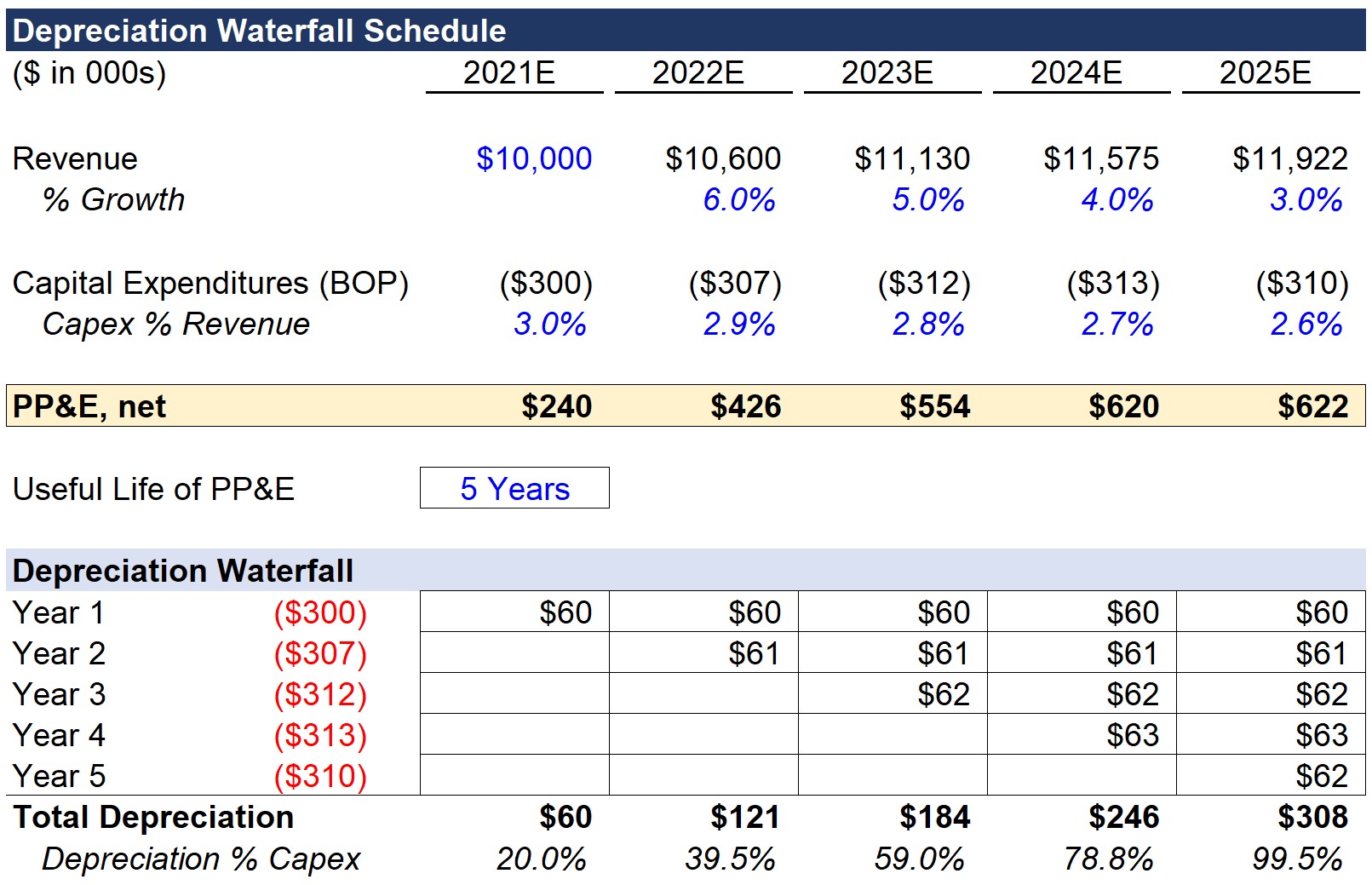