What is Gross Income?

Gross Income represents an individual’s total annual earnings prior to any deductions or taxes paid to the government.

In the case of a business, gross income, or “gross profit”, is the residual profits after subtracting its cost of goods (COGS).

How to Calculate Gross Income (Step-by-Step)

The term “gross income” describes the total amount of income earned by an individual before taxes or any applicable deductions.

The income is inclusive of sources such as the following:

With that said, the gross income of an individual is the starting point from which the taxable income is calculated.

For most individuals, wages will comprise the majority of one’s total earnings, but other side income must also be accounted for, such as the interest income from investments (e.g. savings accounts and the realized gains from stocks).

While sources of income such as salary received from an employer are subject to taxation, other forms of income are either partially or entirely exempt from being taxed such as:

The tax status of each item is determined by the Internal Revenue Code (IRC), i.e. the “IRS tax code”.

The formula for calculating gross income is as follows.

For companies, gross income – more often reported as “Gross Profit” – is calculated by subtracting the cost of goods sold (COGS) from its revenue for the year.

The lower the company’s COGS, the higher its gross profit and gross margin (and vice versa).

What is Adjusted Gross Income (AGI)?

To calculate adjusted gross income, the gross earnings figure is adjusted for any deductions or exemptions, which are formally known as “above-the-line” deductions.

After subtracting the appropriate amount with guidance from a professional accountant, the post-deduction amount results in adjusted gross income (AGI).

However, the amount the individual owes in taxes is neither based on the non-adjusted nor the adjusted gross figure.

Instead, the adjusted gross income (AGI) metric must be adjusted for the standard deduction or itemized deductions, which then results in the individual’s taxable income for the given year.

The reduction amount is the greater of either the:

Gross vs. Net Income: What is the Difference?

The gross income of an individual represents the total earnings a person receives in the taxable year before taxes and any deductions are considered.

Once taxes and deductions are deducted, the remaining amount is net income.

Net income is the leftover amount of money belonging to the individual.

The percentage difference between gross income and net income tends to be more predictable for individuals rather than companies because the two values can vary substantially more and fluctuate year-to-year for companies due to the increased number of variables that can impact a company’s profitability.

If the variance between a company’s gross profit and net income is substantial, that may mean that the company needs to reconsider its spending habits and implement cost-cutting measures to improve its profitability, i.e. eliminate or reduce unnecessary costs.

Suppose an individual has begun the process of filing their taxes with the IRS for fiscal year 2021.

The total dollar value of the realized capital gains from stocks was $10,000, along with $2,000 in dividends received as a shareholder and $2,000 in interest income from other investments.

After calculating the sum of all four sources of income, we arrive at a gross income figure of $214,000 for the individual in 2021. 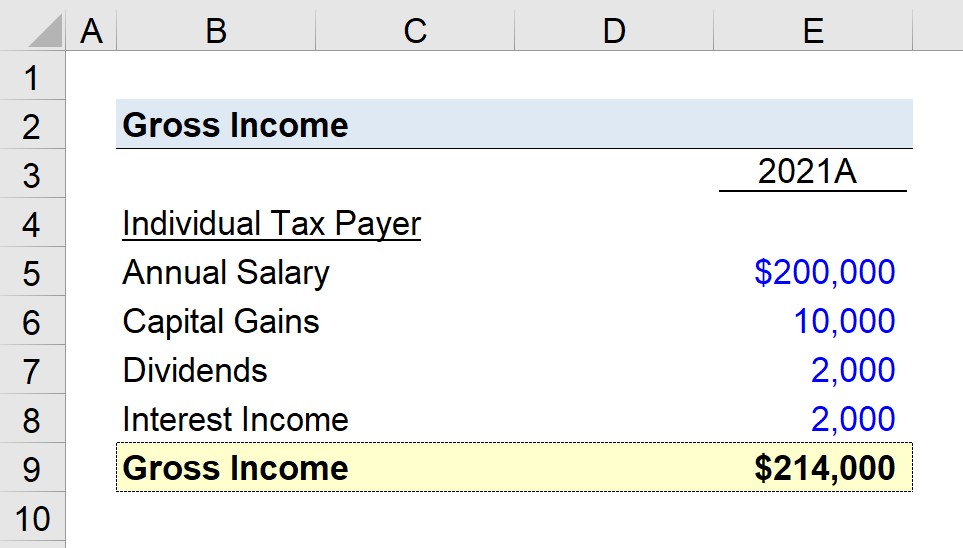